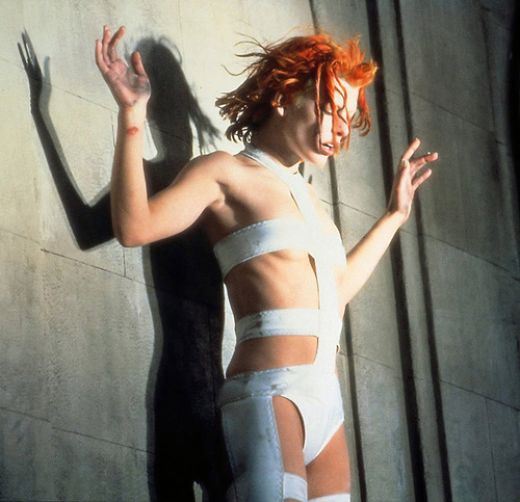 When it comes to designing for science fiction movies, There are few designers that fit the bill, but I can think of none better for the task than Jean Paul Gaultier. His signature style of the perfect silhouette ensured tight rubber and small amounts of material covering ones modesty. The costumes worn by model Milla Jovovich still inspire costumes today. They are very theatrical in style, and where I couldn’t see someone wearing it walking down the street, it is very striking on screen and stage.

Gaultier had designed the costume for many film and stage performances, including the infamous cone bra for Madonna and outfits for rocker Marilyn Manson. His films included Kika and The city of lost children (La Cité des enfants perdus). The fifth element, true to Gaultier’s style, is like a futuristic catwalk show, from Milla’s “bandage and rubber” outfits, to Bruce Willis’ backless t-shirt and perfectly fitting tuxedos, even the smaller roles are fashion stars: Chris Rock in his leopard fur coat and Gary Oldman in his military inspired villain suits.