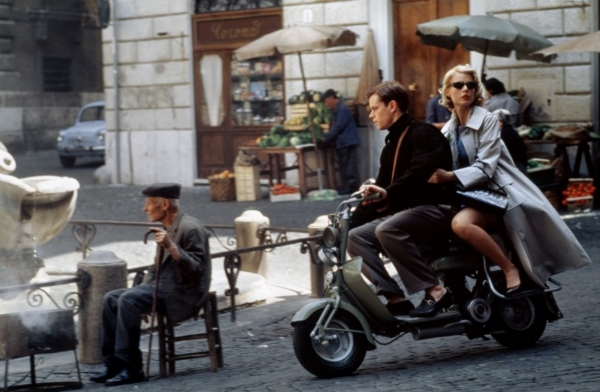 Filmed mainly in Italy, the elegant Mediterranean location, the beautiful cast of the film and the sartorial genius meant that The Talented Mr Ripley was bound to be an aesthetical masterpiece.

Jude Law and Gwyneth Paltrow play Dickie and Marge, young American lovers living in Italy and riding on the coat tails of their wealthy East Coast parents. Tom Ripley, a young con artist living in New York is propositioned by Dickie’s father to go and convince Dickie to come back to the USA and make something of himself. Ripley does as is asked for a tidy fee and ends up developing an unhealthy obsession for Dickie, so much so that he kills him and takes over his life.

Dickie and Marge are both styled perfectly in a torrent of wealth typical of the Mediterranean Riviera. Dickie sports knitted polo shirts, an array of colourful Bermuda shorts, white slacks, and breezy linen blazers while Marge shows off in bright bikinis and floral linen skirts, cotton sleeveless shirts tied off at the midriff and glamorous sundresses. In contrast, Tom, not yet finding an identity of his own, wears rather boring attire; gingham shirts, khaki chinos and corduroy blazers, until he adopts Dickie’s style when he takes over his life, and even then never seems as comfortable or confident as Dickie was.

Ann Roth teamed with Gary Jones to design the costume for this film, achieving an academy award nomination for best costume. They set precedent for a rise in popularity of 1950s upper class summer fashion coming into the 21st Century.