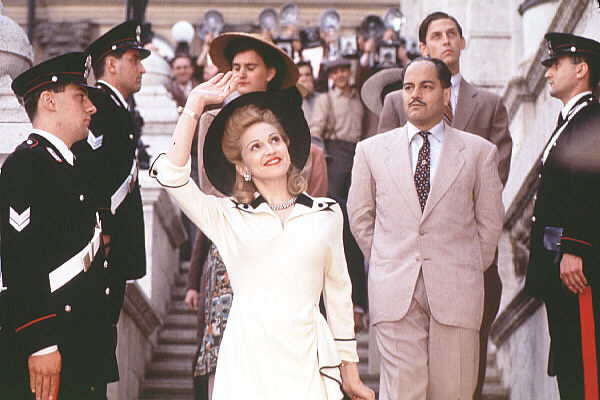 Eva Peron was an icon, not only to women of Argentina, but to women of the world. Her marriage to the Argentine President Juan Peron and surge into political importance helped end suffrage for women and made life a better place for the working class in Argentina in the 1940s and 50s. It’s no wonder her role model status was followed not only as a political figure but also as a fashion icon. Evita was a musical based on the life of Eva Peron written initially for film but made it onto the West End and Broadway before becoming a feature film starring Madonna in 1996.

The film featured many elegant silhouettes, designer gowns, Dior suits and a signature mink stole, typical of the first lady herself, so many in fact, that it also earned Madonna a Guinness world record title for most costume changes in a feature length film: 85 times (which included 39 hats, 45 pairs of shoes, and 56 pairs of earrings).

The New York times said “Some designers and retailers say the film has handed them a whopping opportunity – nothing less than a chance to change the course of fashion as they promote a glamorous new look.” Penny Rose, the costume designer for this film and others such as Pirates of the Caribbean, was nominated for a BAFTA award for the best costume design.