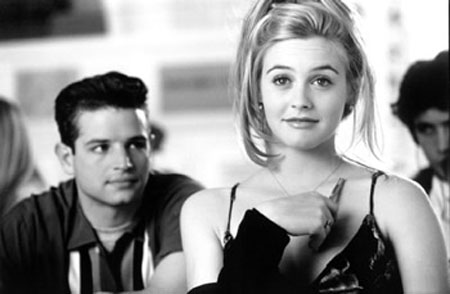 The Nineties were all about grunge. Even before bands like Nirvana became popular people were wearing flannel shirts, baggy thread bear jeans and scuffed Dr. Martens. Clueless brought forward a much neater and cleaner version of grunge that became as popular as its predecessor.

Fashion was a protagonist in this 1995 teen movie centred around Cher Horowitz, a young teenager who lives in a Beverly hills mansion with her father and is the most popular girl in school. The whole storyline based on her making over a new girl in town from a grungy, dishevelled style to look more like the acceptable fashion conscious students.

Flannel became plaid and moved from the shapeless shirts to fitted jackets with matching short kilts. Knee high socks were worn instead of hold up tights with holes in them. It was a super schoolgirl look where accessories were the focus.

Designers were becoming important as well, Cher refuses to lie down on a petrol station floor while being mugged because she is wearing an Alaïa dress, and Calvin Klein is referenced in the film as well. “We wanted to bring something fresh and new,” says costume designer Mona May. “We wanted to bring the school girl, the femininity of girls and the prettiness of colour to the screen, and create something unusual and fresh for kids to emulate”.

With 56 costume changes for Cher alone there was definitely a lot to work with.