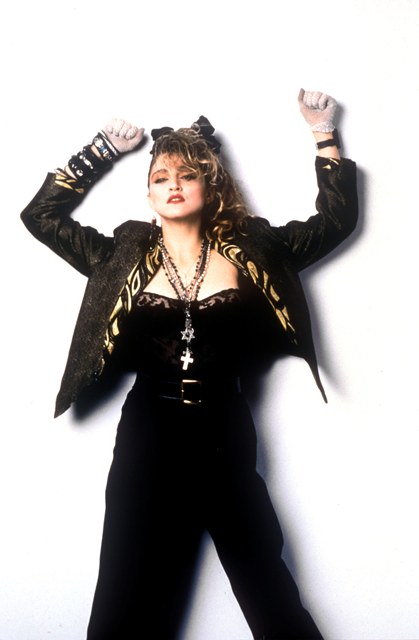 The 1980’s were a wash of splendour and sparkle with a pinch defiance as the world began to take hold of pop culture. No one was more arguably taking hold of this than Madonna. Born on August 16th, 1958 in Bay City, Michigan, Madonna became the staple look for girls all over the world. No one has ever had more of an accessible style than Madonna, in the beginning of her career.

Exploding onto the scene in 1982 she evolved her look into the girl next door, where your parents would conservatively pucker their heads at the sight of this post punk pop princess. This attitude, transcended through her clothing; a mixture of big hair, dramatic eye makeup and bangles galore, was a style to be reckoned with and unlike her crosses, was not hard to bear. This provocative push in fashion was down to meticulous styling by Maripol, this creation brought about the Madonna years, where girls everywhere mimicked and transformed their look into a powerhouse of bleached hair, lace vests and the over sized denim jackets.

Throughout the 80’s Madonna kept hold of this look whilst bringing in others, such as her, “Papa Don’t Preach” video which showed Madonna donning a more classic look whilst retaining her defiant young adult style.

She built her career against a storm of backlash from religious groups which only fuelled the fire for her blaze across the American screen. Such events as her, “Like A Virgin” spot on the MTV Video Music Awards, sealed her in the annals of pop history and was just a taste for the explicit and sensual nature Madonna was bringing.   Her success has only grown and her life has been played out on every media platform. Her marriages to Sean Penn and Guy Ritchie followed by the birth and adoption of her children became media gold, with everyone keeping an eye on this Material Girl.

As her career progressed, so did her style and the 80’s Madonna evolved her look keeping to themes surrounding her sound at the time and became the muse to many designers, inspiring them to create their most daring garments yet. Jean Paul Gaultier, the famed french designer created her costumes for her most famous tour, The Blonde Ambition Tour in 1990 which was the tour Madonna was on in her acclaimed documentary, ‘Truth or Dare’. This included the widely acclaimed cone brassiere, which she donned with dramatic makeup and pulled back hair resembling a warrior princess. This look, the wearing of underwear as outwear started off a reckoning trend, stapling it as a go to provocative style that won’t ever hinder. Her grasp on the fashion world would once again become apparent with her smash hit, ‘Vogue’, which was influenced by starlets of the past, and the underground movement of drag dance, where in the 80’s, Voguing, which meant you had to strike a pose and hold it, became a mass phenomenon and was opened up to the world after her homage to the dance style.

Madonna, not just an inspiration, she also speared campaigns for designers such as Louis Vuitton, where she raised controversy for her striking appearance as a femme fatal in deep, dark tones which was shot by Steven Meisel, filled the pages of fashion magazines in 2009. A year later she collaborated with long time friends, Dolce & Gabbana, for a range of eye wear, an ad shot by Steven Klein. She even set herself behind the lens, directing her own motion pictures, ‘Filth and Wisdom’ (2008) and ‘W.E’ (2011). She also lent her skills to Miu Miu’s A/W ’10 campaign, directing it for the fashion brand. Her profile with magazines, designers and photographers would fair her well when it came time for her to launch her own collection. Already working with H&M, Madonna launched her own line with daughter, Lourdes in 2009. The collection called, Material Girl with retail group, Macy’s. It is described as an 80’s post punk reflection of Madonna’s early years, sharing the title of her 80’s smash hit, ‘Material Girl’. Using famed, young, adults as it’s models the likes of rebellious celebrities such as, Taylor Momsen, Kelly Osborne and the current cover girl, Georgia May Jagger.

After a whirlwind career with countless number one albums and record breaking ticket sales, Madonna still keeps hold of that brash, unapologetic sexuality with a promiscuous edge and whether it be strapping on a leotard or a Gaultier cone bra, she is still dancing like its 1985 and the party is far from over.