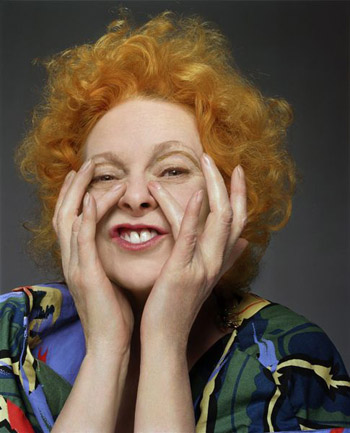 Vivienne Westwood, born Vivienne Isabel Swire, moved to Harrow London aged 17 with her family. Studying fashion and silversmithing at the Harrow School of Art, Westwood left after one term believing an artistic career would not be lucrative for a girl from a working class home. Taking up a job in a factory, Westwood studied to become a teacher. She then worked as a primary school teacher while designing and selling jewellery on Portobello Road. In 1961 Westwood met Derek Westwood and a year later married him. Designing her own dress for the ceremony she followed on to give birth to a son Benjamin Westwood in 1963.

Later on when she met Malcolm McLaren, it signified the end of Westwood’s marriage to Derek. Westwood and McLaren moved into a council flat in Clapham, where she continued to teach until McLaren opened up a boutique on King’s Road. Westwood designed clothes for the boutique taking inspiration from bikers, fetishist and prostitutes. During this time McLaren began to manage the band the Sex Pistols. With the band wearing the boutiques designs, attention grew for Westwood and McLaren. During this period the couple had a child named Joseph. Image copyrights: Courtesy of Vivienne Westwood

After Westwood and McLarens split, personally and professionally, she carried on alone opening her own shop Nostalgia of Mud. In 1981 Westwood showed her first collection, involving both McLaren and Westwood designs. Her following shows and collections were divided into periods including; the Early years, the Pagan Years, Anglomania and Exploration.

In 1992 she married her former design assistant, Andreas Kronthler and in the same year received an OBE from the Queen. 2004 – 2005 saw her first major retrospective of work shown at the National Gallery of Australia in Canberra and at the Victoria and Albert Museum in London.

Known for her anti-establishment and forthright opinions, Westwood has always been involved in politics. In 1989 Westwood appeared on the cover of Tatler dressed as the then Prime Minister Margaret Thatcher. The suit she wore had been previously ordered for Thatcher but not yet received and the cover bore ‘this woman was once punk’.

In 2005 Westwood collaborate with civil rights group Liberty, designing exclusive t-shirts and baby wear bearing the slogan ‘I AM NOT A TERRORIST, please don’t arrest me.’ Two years later she transferred her long standing support of the Labour Party to the Conservative Party over issues of civil liberties and human rights on television.