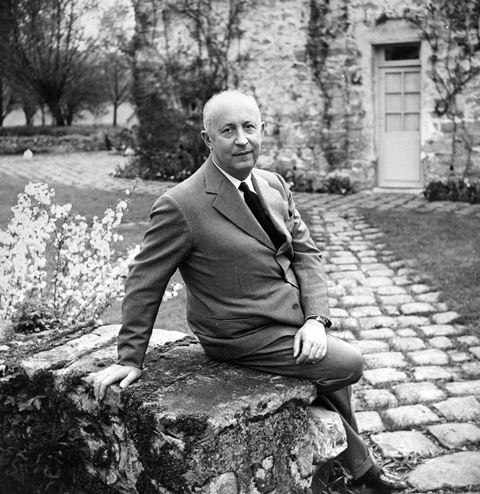 Born into a wealthy family, Dior was destined for a career in architecture.  But, after studying political science at Ecole des Sciences Politiques in Paris, he received money from his father to finance a small art gallery.  However, the gallery failed forcing Dior to join the French Army in 1940.

After two years he left the Army and joined fashion house Lucien Lelong, where he worked alongside Pierre Balmain as the house’s main designers.

On the 16th December 1946 Dior founded his fashion house with the help of Marcel Boussac, a cotton-fabric magnate. By 1947 Dior had attracted attention with his overt use of fabric, bustier-style bodices, wasp waists and curvaceous silhouettes. Crowned creator of the ‘New Look’, Dior was heralded as an overnight sensation.

Taking inspiration from his original desire to become an architect, Dior stated that ‘as a designer, he had to follow the rules and principles of architecture and respect the law of gravity’.

The cinema rushed to use Dior’s designs and the world’s most elegant and fashionable women of the time chose his designs, including the Duchess of Windsor, Rita Hayworth, Ava Gardner and Marlene Dietrich. Dior designed Dietrich’s entire wardrobe in “Stage Fright” by Alfred Hitchcock.

With his favourite places to sketch being in the bath or bed, his designs dominated the pages of fashion magazines.  New silhouettes and lines were created including the Oblique line in 1950, the Oval line and Envol line in 1951, the Princess line and Profile line of 1952, the H line in 1954 , the A line followed by the Y line in 1955. His radical change from austerity fashions helped re-establish Paris as the centre of the fashion world after World War Two.

In 1957 Dior became the first designer to be featured on the cover of TIME magazine proving he was true fashion royalty.

Christian Dior’s died in Italy in October 1957 leaving one of the most prestigious fashion houses in the world without its founder and leader.

Having worked as a design assistant for Dior, Yves Saint Laurent was appointed head designer aged 21. He worked there for two years before being conscripted into the army.

The house still held onto its prestigious reputation after Dior’s death. Her Majesty Farah Pahlavi chose Dior for her coronation and Marilyn Monroe wore Dior in her last ever photo shoot.

In 1984 the fashion house was bought by Bernard Arnault and Gianfranco Ferré was appointed as Artistic Director succeeding Bohan. Ferré brought his excitement and love of baroque to the collections.

With the designer’s intense creativity, the fashion house had brought back theatricality to the fashion world.

John Galliano replaced Ferré in October 1996. Galliano was publicly sacked from Dior in 2011 due to anti-semantic remarks. Bill Gaytten ex Galliano assistant for both his own brand and Dior took his place as interim designer. After receiving mixed reviews, Gaytten was replaced by Raf Simons in April 2012.

A master of shapes and silhouettes, Christian Dior turned the traditional feeling of couture upside down. Creating contemporary fashion, Dior is credited with creating the ‘New Look’, the style helped propel a fashion and social revolution