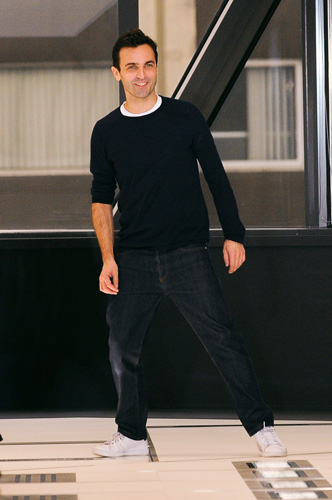 At fifteen Nicolas Ghesquière secured a summer internship working at Agnès B. in Paris. Three years later in 1989, Ghesquière declared he was moving to Paris to immerse himself in fashion.

In 1990 he secured an assistant job to Jean Paul Gaultier. After a few years experience Ghesquière left and began to work as a freelance knitwear designer.

In 1995 Ghesquière was hired by Balenciaga’s parent company to design golf, knitwear and mourning outfits in Japan. Three years later, when Balenciaga’s creative director Josephus Thimister was fired, Ghesquière was offered the position. Relatively unknown to the fashion world, he began to mould his own innovations with those of Cristóbal Balenciaga’s.

At the time he was designing womenswear for Trussardi but shortly left and presented his first ready-to-wear collection for Balenciaga’s Le Dix Spring 1998 show. Ghesquière used volume and modernity in a similar spirit to the labels founder. The collection was well received.

After two and half years under Ghesquière’s direction, Balenciaga reported sales had double to $30 million.

In 2000 Ghesquière released the Lariat handbag. The bag caught the attention of Kate Moss and other celebrities. That September he presented a spring collection for design house Callaghan, where he was hired as a consultant. The following month Ghesquière was named Best Avant-Garde Designer at the VH1/Vogue Fashion Awards.

The Gucci Group acquired a 91 percent share of the company in 2001. Ghesquière owned the remaining shares. The following year a small menswear collection was unveiled and the first boutique opened in New York in February the year after.

In 2004 Ghesquière took inspiration from Balenciaga’s archives, rereleasing and updating the classic Balenciaga bag in different sizes and colours. He followed this by launching Balenciaga Edition, a capsule collection inspired by past Balenciaga designs. This further connected his style to the labels founder.

Ghesquière served as cochair at the Metropolitan’s Costume Institute gala in homage to Paul Poiret in 2007. The following year he received the Accessories Council Excellence Award for Designer of the Year.

In 2010 Ghesquière received International’s Superstar award. The following year in January, he hired Katherine Ross as a consultant for Balenciaga’s expansion in the U.S market.

Ghesquière left Balenciaga in November 2012 and was named creative director for Louis Vuitton in November 2013 after Marc Jacobs anounnced his departure. He presented his firts collection for the french maison at the Cour Carrée du Louvre during the Autumn Winter 2014 Paris Fashion Week.