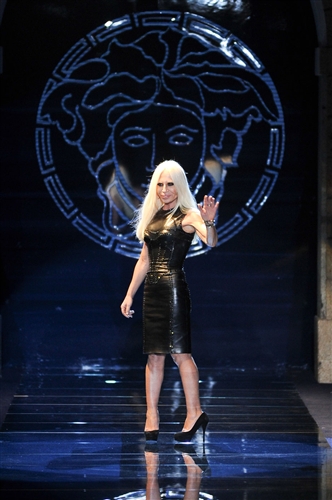 The youngest of four children, Donatella started her interest in fashion from her mothers small tailor shop. Aged eleven, Donatella inherited a large fortune from her Uncle’s death.

With her older brother, Gianni pursuing a career in fashion, Donatella followed him and planned to work for him in public relations, however Gianni said she would be more useful as his ‘muse and critic’.

Plunged into the fashion world from her brother, by the eighties, Donatella had her own diffusion line ‘Versus’ and had a perfume ‘Blonde’ dedicated to her by her brother.

Already designing for her diffusion line, and accessories, Donatella created a children’s line ‘Young Versace’ in 1993.

In 1997, Donatella’s brother Gianni was shot dead. Taking over the company, Donatella was named as Creative Director of the Versace Group.

In 1998, Donatella co-chaired the ‘Fire and Ice’ annual fundraising event for the Woman’s Cancer research program. The following year, Donatella co-hosted ‘Diamonds are Forever’, the millennium celebration in the presence of The Prince of Wales. 1998 also saw Donatella showcase her first couture show, exactly a year and three days after Gianni’s death.

Keeping to her brother’s style, she built a runway over the Hotel Ritz Paris’s swimming pool, just as Gianni had done every season.

Donatella and her late brother Gianni, were awarded by the City of Beverly Hills for their contribution to the worlds of fashion and entertainment in 2007. Two years later, Versace hosted the Whitney Museum’s benefit and Donatella co-hosted the event. Also in 2009, Donatella asked Christopher Kane to revive her much loved ‘Versus’ line.

Overseeing the production of Versace collections every year, Donatella has managed to expand the company with great success. With a portfolio now containing Fashion, accessories, home furnishings and hotels, Versace has now turned into a lifestyle brand.

Managing to keep Versace as a major player in the fashion world, Donatella and her designs are loved by celebrities worldwide, including Madonna, Elton John, Kate Moss, Demi Moore and many more.