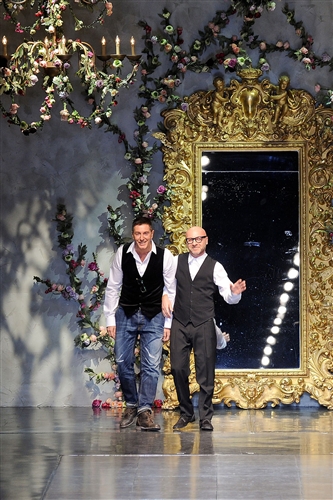 Domenico Dolce was born Palermo, Sicily in 1958. With his father working as a tailor, his love for fashion is credited with this. Studying fashion at a young age, he worked in his family’s clothing factory. He then moved to Milan where he worked at a design studio. Stefano Gabbana was born in Milan, Italy in 1962. He became interested in fashion while admiring the designer Fiorucci. Gabbana went on to study graphic design at university and planned to go into advertising, however after sampling the career, quit and turned to fashion.

Dolce and Gabbana first met while working as assistants at an atelier in Milan, there introduction followed on to them starting their partnership in 1982, however they were still freelance designer for other companies at the time. At first struggling to take off, the pair created their own shows anywhere they could.

In 1990 they both began to design the Complice line for the Genny Group, which had previously been done by Versace, they also added accessories, beachwear and fragrance to their own company in 1992. Expanding again in 1994 the pair introduced their diffusion line D&G for first men and later on women.

Catching the attention of pop sensations, Dolce and Gabbana designed 1,500 costumes for Madonna’s world tour, ‘The Girlie Show’ in 1993. They also designed for Madonna’s ‘Music’ album, dressing her and her entire ensemble as well as creating a backdrop for the tour.

In 1995 they published their first book, ’10 Years of Dolce and Gabbana’ and almost ten years later, they opened their first stand alone store on Bond Street in London, England in 2004. The following year, the couple who had been romantically involved split personally but not professionally.

In 2004 Dolce and Gabbana also started designing the uniforms for A.C Milan and most recently have partnered with Kylie Minogue to design for her Aphrodite – Les Folies 2011 tour.

Domenico Dolce and Steffano Gabbana are known for their seductive, traditional styles. Both with different tastes, they’re known for their glamour, sexy styles and curves, sometimes with shades of Sophia Loren.