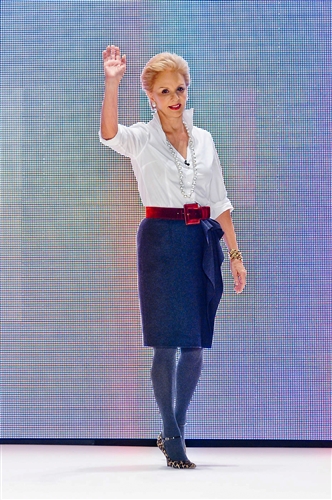 Born into a family of statesmen and landowners, Caroline Herrera first experienced fashion at 13, when she attended a Cristóbal Balenciaga couture show with her grandmother. In 1957, Herrera married a Venezuelan landowner, with whom she had two daughters. Divorcing in 1964, Herrera moved back into her parents’ home with her two young children. While living at home, Herrera started working as a publicist for Emilio Pucci.

Herrera went on to marry Reinaldo Herrera Guevara in 1968. The pair embarked on an international lifestyle, spending time with royals by day and the Andy Warhol set by night. The couple had two daughters together, and in 1980, the family moved to New York.

Having been regularly featured on international best-dressed lists, Herrera decided she wanted to start a fashion related venture. Under the influence and encouragement of Count Rudi Crespi and Diana Vreeland, Herrera started designing.

In the autumn of 1980, Herrera had created 20 dresses, which she showed in a friends Park Avenue apartment. Inviting buyers, friends and acquaintances, the designs were immediately popular resulting in buyers wanting to purchase the entire line.

With no official company or means of production, Herrera searched for a backer and found Armando de Armas, a publishing tycoon who agreed to finance her. Within a few months Carolina Herrera opened a show room in New York. This followed with her first full collection shown in 1981 in New York.

Despite some negative reviews, Herrera’s company was growing with some devoted customers including Estee Lauder and Jacqueline Kennedy Onassis. With Herrera being one of the first to use padded shoulders, she commented; “the whole fashion world was going mad on layer after layer of very loose skirts and free blouses – and no shapes. I came out with a collection that was all fitted.”

Her popularity was boosted even more so when Herrera designed the wedding dress for Caroline Kennedy in 1986. With Herrera becoming an overnight sensation across North America, the company soon expanded to offer custom-made dresses, bridal wear and a diffusion line.

In 1988, Herrera launched her first fragrance, which followed by lucrative accessory and eyewear deals. Three years later in 1991, a successful men’s fragrance was launched.

In 1994, Herrera’s partnership with Armas ended, with him selling his share to Puig.

Herrera opened her first store in 2000, located in Manhattan. Two years later, she expanded abroad opening a boutique in Madrid.

Receiving a number of rewards including the Gold Medal of the Queen Sofia Spanish Institute in 1997, Spain’s Gold Medal for Merit in the Fine Arts in 2002, the Womenswear Designer of the Year in 2004 and the Geoffrey Beene Lifetime Achievement Award in 2008.

Known for the elegance and intricacy of her clothes and fragrances, Caroline Herrera’s style is very glamorous and sophisticated. Pushing the shoulder pad in the early eighties, Herrera is identified for her crisp white shirts accessorised with jewels. Her company’s designs reflect her own personal style of chic luxe.