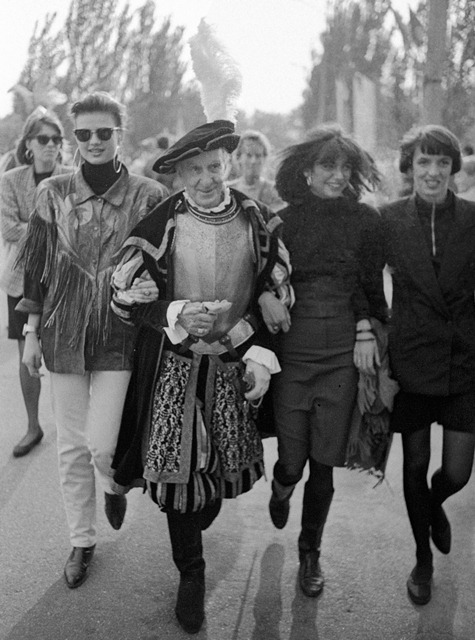 Born in Naples to an aristocrat family, Emilio Pucci was an active teenager interested in sports and education. Studying in Italy and the USA, Pucci studied agriculture, political science and social science. The latter from Reed College in Oregon, were Pucci received a skiing scholarship. After his education Pucci joined the Italian Air Force, serving as a torpedo bomber pilot during World War II. While studying at Reed, Pucci designed uniforms for the college ski team. With experience in designing ski wear, Pucci later designed his own ski outfit and followed on to create a ski suit for a female friend.

The outfit was photographed and made its way into Harper Bazaar. Through the publicity gained, Pucci was asked to design for the magazine who was releasing an article of European winter fashion in 1948. Pucci’s use of stretch fabrics and his sleek designs caused immediate success for him with several American manufacturers offering to produce his designs. Declining, Pucci instead left the air force and set up his own couture fashion house in his family home, a Renaissance-era Palazzo in the middle of Florence.

Initially producing a swimwear line in 1949, Pucci decided to started to move into other products with brightly coloured, boldly patterned designs. Under the influence of Stanley Marcus from Neiman Marcus, Pucci produced blouses and silk dresses with his bold patterns on.

In 1950 Pucci opened a boutique in Capri. His feminine and free flowing shapes with exuberant colours and precious fabrics reflected the jet-set crowds’ glamour.

During the early fifties Pucci received the Neiman Marcus Award in Dallas and the Burdine’s Sunshine Award in Miami. Pucci’s designed were worn by fashion icons including Sophia Loren, Jackie Kennedy and Marilyn Monroe who was buried in one of his dresses.

After Emilio Pucci’s death, his daughter Laudomia took the reins of the business. During the nineties the label enjoyed a renaissance with the iconic vivid patterns appearing on Lycra leggings.

In 2000, LVMH acquired 67% of the company, however Laudomia continued on as Image Director and Deputy Chairman of the Brand. In 2008 the company appointed Norwegian designer Peter Oundas as Creative Director. With the company expanding still, Pucci now has offices in North America, Japan and Hong Kong but is still run from its original headquarters in Florence.