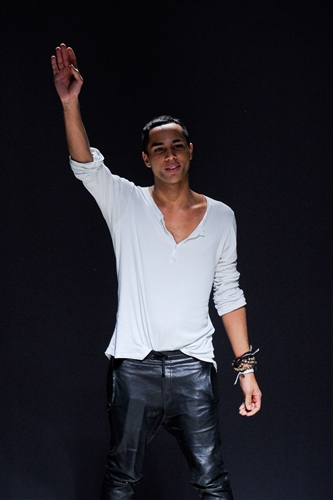 After being placed in an orphanage, Oliver Rousteing was adopted and raised in Bordeaux, France. With a talent for design, Rousteing studied fashion at the ESMOD School in Paris in 2003. After graduating, he joined Roberto Cavalli where he worked for five years. In control of both the women’s and men’s ready-to-wear collections, Rousteing received recognition for both during his time there.

Rousteing left Roberto Cavalli to join Balmain; working under the direction of Christophe Decarnin, Rousteing was in charge of the women’s ready-to-wear.  After Decarnin’s departure from the label in April 2011, Rousteing was named creative director of the luxury French fashion house.

Rousteing’s debut collection for Balmain was deemed a success by the critics. The Resort 2012 collection kept the sharp tailoring from Routeing’s predecessor but pushed the couture aesthetic creating a seamless transition between the two.

With pressure to continue Balmain’s success, Oliver Rousteing is sticking to the rock chic style the label is known for but adding his own couture glamour.