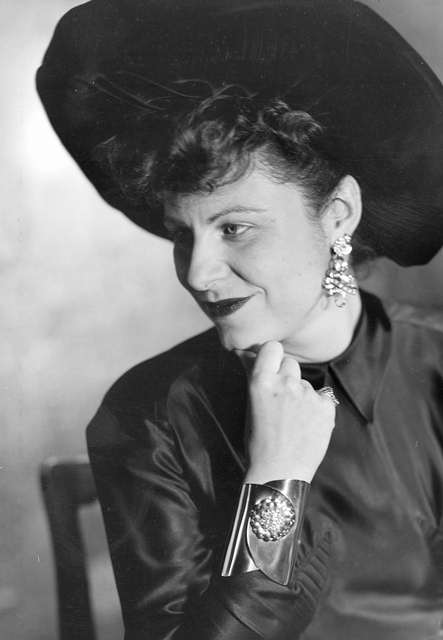 Nina Ricci moved with her family to France in 1895 aged 12. When Ricci was 13 she began an apprenticeship with a dressmaker. With her interest in fashion steadily growing she married an Italian jeweller, Luigi Ricci, in 1904. Four years later Ricci joined a fashion house, where she worked as a designer for 20 years.

Ricci founded the Nina Ricci house in 1932 with the help of her husband. The house grew rapidly and soon the one room business expanded to three buildings over 11 floors.

After the Second World War Ricci’s son Robert, who was taking care of the business side of the company, organised over 150 mannequins from forty Paris couturiers including themselves, Cristóbal Balenciaga and Madame Gres. Dressed in the labels’ best designs, they were exhibited at the Louvre. With the idea being to revive the popularity of haute couture, the event was so successful it toured Europe and then the U.S.

By the 1950s Ricci took a back role in the business. Her son appointed a new head designer, Jules-Francois Crahay, in 1954.

Crahay left Ricci in 1963 and was replaced by Gerard Pipart.

Nina Ricci died on the 30th November 1970 aged 87. After her death Crahay returned and was appointed head of the Nina Ricci house. Robert Ricci continued to run the business until he died in 1988. The company was then taken over by Ricci’s son in-law, Gilles Fuchs.

The business was bought by Massimo Guissain in 1998.Then  followed a succession of head designers including Nathalie Gervais, James Aquiar, Lars Nilsson, Oliver Theyskens and finally Peter Copping in 2009.

Nina Ricci gave the respected house a grounding of impeccable taste and French refinement. Ricci was known for her technical skills and high standards that have transmuted throughout the years via the various designers at the label. The house offers elegant clothes that give a complete look which are both feminine and relaxed.

One thought on “Nina Ricci”