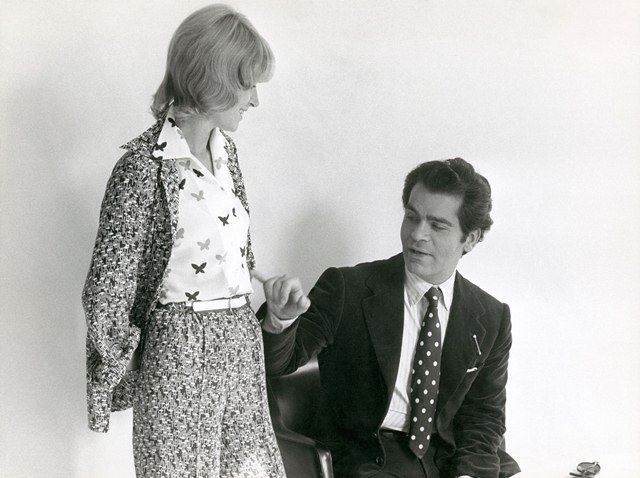 Born in Germany, Lagerfeld emigrated to Paris at the age of 14. Three years later in 1955, Lagerfeld won a competition enabling him to work at Pierre Balmain. After three years at Balmain, Lagerfeld moved onto Jean Patou.

While at Jean Patou, Lagerfeld designed the haute couture collections under the name of Roland Karl. The collections were presented twice yearly with Lagerfeld featuring for five years. His initial collections for Jean Patou were not well received by the press. However, his subsequent collections impressed and his elegant, understated, chic style started to be found in every collection.

Lagerfeld’s last collections for Jean Patou saw the press turn on him again. Designing skirts deemed to be the shortest in Paris; his designs were described as ready-to-wear, not couture.

After five years at Jean Patou, Lagerfeld decided to leave, launching himself as a freelance designer. He worked at Krizia, Charles Jourdan and Valentino, honing his skills.

With financial backing from his family, Lagerfeld opened a small boutique in Paris. Alongside this, Lagerfeld carried on freelance designing, this time for Tiziani, a label launched only as couture but branching into ready-to-wear.

In 1965 Lagerfeld was offered a position at Italian luxury house Fendi, where he began to design fur, clothing and accessories. Under Lagerfeld’s direction, Fendi’s fur was changed, moulded and redesigned resulting in fur becoming fashionable.

In 1966 Lagerfeld joined French fashion house Chloé appointed as the house’s head designer. Under Lagerfeld’s influence, Chloé became one of the most influential fashion houses of the 1970s.

In 1983 Lagerfeld left Chloé to take up a position at Chanel. Under Lagerfeld’s direction Chanel became a global phenomenon. Lagerfeld reinvented the classic Chanel suit and added a sporty feel to the brand with puffa jackets and leggings branded with the Chanel signature.

In 1984, after working for a succession of global fashion houses, Lagerfeld launched his eponymous label, which he said would channel “intellectual sexiness”.

Lagerfeld collaborated with Swedish High Street retailer H&M in 2004 creating a capsule collection that sold out within hours of its release.

In 2005 Lagerfeld sold his own name brands, Lagerfeld Gallery and Lagerfeld, to Tommy Hilfiger with the agreement he would maintain full design control.

Lagerfeld launched a new collection in 2006 K Karl Lagerfeld for both men and women.

In 2010 Lagerfeld collaborated with Italian label Hogan, designing two footwear lines. The following year it was confirmed that Lagerfeld would create a capsule collection for American department store Macy’s. The same year Lagerfeld was awarded the Gordon Parks Foundation Award in recognition for his work in film, photography and fashion.

In 2012 Lagerfeld collaborated with online retailer Net-A-Porter resulting in a diffusion line, Karl, to be sold on their website.

Known for his iconic style and legendary fan base, Lagerfeld’s been named Darling Dictator and King Karl. His own take on it was describing himself as an ‘intelligent opportunist’. With experience in so many markets, his ability to handle fur and clever fabric experimentalist makes him idolized in the fashion world.