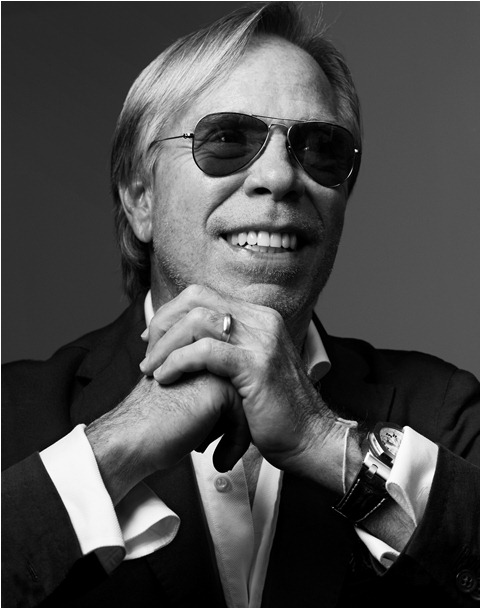 While in high school Tommy Hilfiger wanted to bring big city fashion to smaller communities. With this idea, Hilfiger opened his own store ‘People’s Place’ in 1969.  Self taught, he provided designer clothes that his customers wanted but didn’t have access too. With his first venture a success, Hilfiger moved to New York in 1979 to pursue a career as a fashion designer.

Hilfiger attracted the attention of businessman Mohan Murjani. Murjani was interested in launching a menswear line and believed that Hilfiger’s entrepreneurial background would offer a unique approach to men’s fashion.

In 1987 Murjani and Hilfiger expanded their company globally distributing in the U.S, South America, the Caribbean, Canada and Panama. However, in 1989, Novel Enterprises acquired a majority ownership in the business terminating the license agreement with Murjani.

Under new leadership the company continued to expand. In 1992 distribution began in Japan. The following year men’s and boy’s neckwear, belts, leather goods and ‘boys 8-20’ were launched. In 1993 men’s sportcoats, suits, underwear and dress shirts were added to the business.

In 1995 men’s robes, sleepwear and golf wear were added to the portfolio alongside the launch of Tommy Hilfiger Toiletries Co, which led to the release of the first fragrance. 1995 also saw Hilfiger awarded the Menswear Designer of the Year Award by the Council of Fashion Designers of America.

Hilfiger launched a womenswear line in 1996, showing the collection during the companies first overseas fashion show at London Fashion Week. This was accompanied with the release of a female fragrance.

Hilfiger published his first book in 1997 called ‘All American Style Guide’. The business also started its expansion into Europe, and sponsored the Rolling Stones’ and Sheryl Crow’s tours by dressing both of them.

In 1988 the company expanded further launching a homewear and denim line. Footwear, sunglasses, an infant and toddler line and accessories were also launched.

An online store was launched in 1999 with Hilfiger publishing his second book ‘Rock Style’, focussing on his ‘rock and roll’ inspiration.  The business opened their first U.S flagship store in New York in 2001. The following year stores opened worldwide.

More products including skiwear were launched in 2004. The year also marked collaboration with Beyonce, creating a fragrance ‘True Star.’ The company acquired the Karl Lagerfeld brand in the same year.

In 2005 the company celebrated 20 years in fashion with a show during New York Fashion Week. Celebrities including Jennifer Lopez, Janet Jackson and the Black Eyed Peas performed.

Hilfiger was awarded ‘Designer of the Year’ by GQ Spain in 2006. The business also launched Tommy 10, an updated version of the brands’ fragrances to celebrate the fragrances’ 10th anniversary.

Due to declining sales, Hilfiger sold his company in 2006 to Apex Partners.

Hilfiger was awarded the fashion category at the 60th annual Bambi Awards in 2008. The following year the company opened a new flagship store in New York. The 22,000 square foot store was the largest worldwide retail store.

A limited edition footwear collection was released in 2010 featuring artwork by Keith Haring. The company also celebrated its 25thAnniversary with a fashion show and party at the Metropolitan Opera.

Tommy Hilfiger has created a world wide lifestyle brand. The businesses style is known to offer superior styling and quality that celebrates classic American cool. The Hilfiger look gives a twist to the classic preppy fashions with a relaxed casual look.