“My weakness…is architecture. I think of my work as ephemeral architecture, dedicated to the beauty of the female body.”
Christian Dior 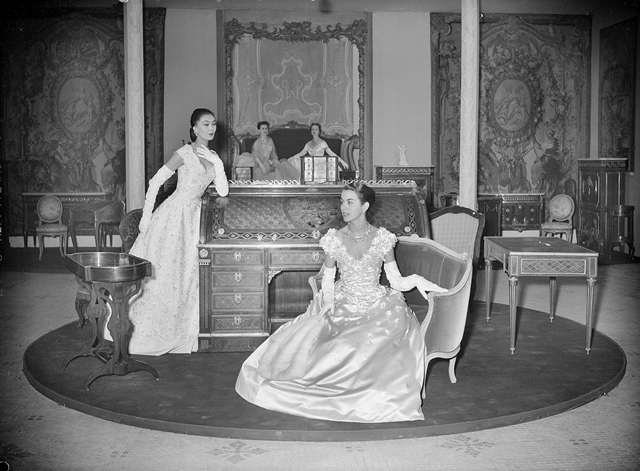 In the 1950s the world had to deal with the post war destruction and rebuilding of architecture from the German bombing. In Britain the re-election of Winston Churchill resulted in the abolition of food rationing and eventually the lifting of rationing on clothing and fabrics. The end of the war saw a resurgence in Haute Couture with Christian Dior and Cristóbal Balenciaga rebelling from the restricted austerity styles. The Fifties also saw changes in family life – women turned back into housekeepers and the glamorous Fifties housewife was born.

With the idea of rebuilding communities, lighter, happier entertainment was produced. Musicals including Guys and Dolls and films like Breathless were inspired by the new era of the Fifties. Sunset Boulevard was also a celebrated film noir involving a former silent movie star fading away into Hollywood.

An innovation in new textiles and technologies appeared during the Fifties with new synthetic and easy-care fabrics being developed. This fitted in with the new suburban lifestyle of the Fifties. Acrylic, spandex, polyester and triacetate were introduced in the Fifties along with nylon, orlon and dacron which could retain heat set pleats after washing. 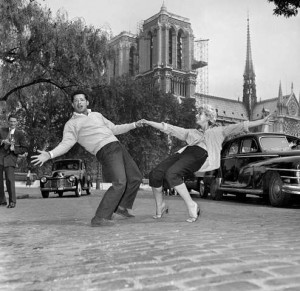 The Fifties saw a new development in the music scene with Rock ‘n’ Roll and rhythm and blues music becoming hugely popular. The decade saw the start of music icons such as Elvis, Johnny Cash and June Carter. Also during the Fifties a new group of actors and singers developed called The Rat Pack based around Stephen Bogart. Their big band, crooner style was immensely popular and they were a constant hit throughout the fifties and sixties. The original members of The Rat Pack included Frank Sinatra, Sid Luft, Stephen Bogart, Judy Garland, Lauren Bacall, Swify Lazar, Katherine Hepburn, Spencer Tracy, George Cukor, Rex Harrison, Cary Grant and Jimmy Van Heusen. With later to follow; Sammy Davis Jr. and Dean Martin.

The Fifties saw a return to femininity. The British fashion industry started to develop moving away from the U.S Styles and fabrics were being influenced by British designers who were celebrating the female hourglass figure. More silhouettes were emerging with Dior using A-line styles and princess style dresses. 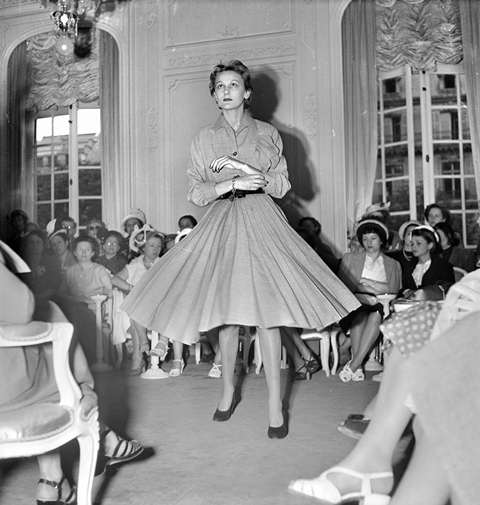 Hubert de Givenchy designed the ‘sack’ style dress – a loose straight short shift dress which helped inspire the Mary Quant style dresses of the Sixties. The shirt waist dress was a popular choice which crated a nipped in waist with a full skirt showing of a more elegant look. A trapeze style dress created an almost triangular shaped silhouette this style was also modified to become a popular styled Sixties dress.

Capes and shawls were popular cover ups for these different Fifties silhouettes.

During the Fifties the ready to wear mass market took off with Marks and Spencer being one of the leaders. Renowned for quality and value for money, Paris and the U.S often copied the way Marks and Spencer made their garments. A casual day look inspired by Audrey Hepburn was popular. Capri pants, knitted jumpers and flat ballet pumps gave a more practical, feminine girly look which the public copied. For summer a new beachwear style was developing with matching styled bikinis paired with floating skirts.

Hats were no longer key for the Fifties. Instead women were wearing scarves in their hair more often. Butterfly glasses were an extra touch for the face and large waist belts were worn to emphasise the feminine silhouette. Costume jewellery was worn instead of the real jewels. Oversized rings and bracelets became a staple. Footwear moved away from the utility styling and lavish embellishments, velvet and crocodile skin were used for shoes.

Roger Vivier was a famous shoe designer who wanted to create shoes with more freedom, he had popular designs for the late Fifties ballet pumps and high heels.

Menswear fashion was becoming influenced by the icons and musicians. The Rat Pack style of suits and trilby hats was a popular choice for ages over 30. A casual country style clothing of checks and cardigans were worn in a lighter styled fabric. The Teddy Boy look emerged during the fifties originating in America. Inspired by Edwardian styles the look consisted of an Edwardian ‘Drape’ style jacket with a long knee length, single breasted jacket with cuffs and lapels in contrasting velvets or satin. Worn with either matching or contrasting drainpipe trousers, stiff shirts and brocade waistcoats. The wool jacket also had many pockets and was worn with loud ties. 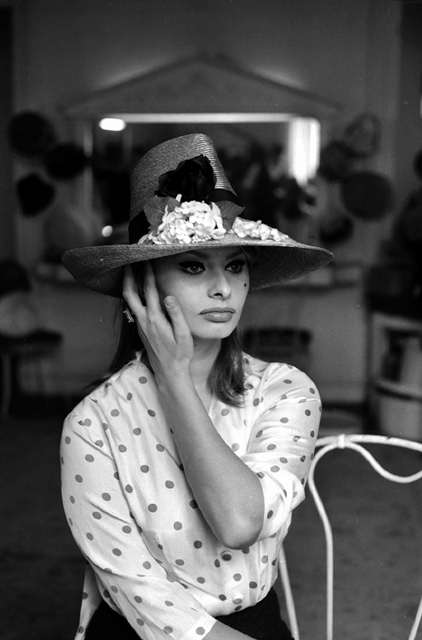 The Icons of this decade are still influencing people in the present day. Audrey Hepburn was a film star with classic glamour. Her simple sweater and Capri pant style was hugely popular. Marilyn Monroe another famous film star was seen as a sex symbol, and her glamorous on screen outfits symbolized the grand evening styles known for the fifties. Elizabeth Taylor, an actress, had her career take of during the fifties with films including “Father of the Bride”, “A place in the Sun” and “Suddenly, Last Summer”. Brigitte Bardot, Grace Kelly and Sophia Loren were all also major icons of the decade.

The male icons influenced the male fashion hugely. While the T-shirt was previously only seen as underwear, James Dean changed this. His role in “Rebel without a Cause” opened other men’s eyes to the potential of their ‘underwear’. He also was often seen in denim helping create the fashionable denim look. The actor Marlon Brando showed a dark jeans and leather jacket style and was known for his tight t-shirts worn in “A Street Car Named Desire”, while the actor Cary Grant influenced the sleek hair look.

With the Dior New Look, Christian Dior was hugely influential in the Fifties with his rebelled use of fabric. He used as much as he could and cut the fabric in a certain way that they fell elegantly. He wanted to show that his garments were luxurious and fitted well. Celebrating the hourglass figure the look became iconic for Dior.

Like Dior, Cristobal Balenciaga went to town on fabrics to show off extravagance. He used petticoats, lace and netting with heavy floral, bright fabrics. With embroidery and embellishment it was far away from the rationing of the previous decade. 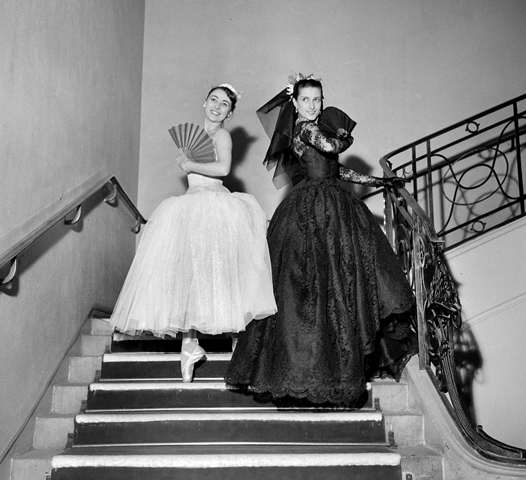 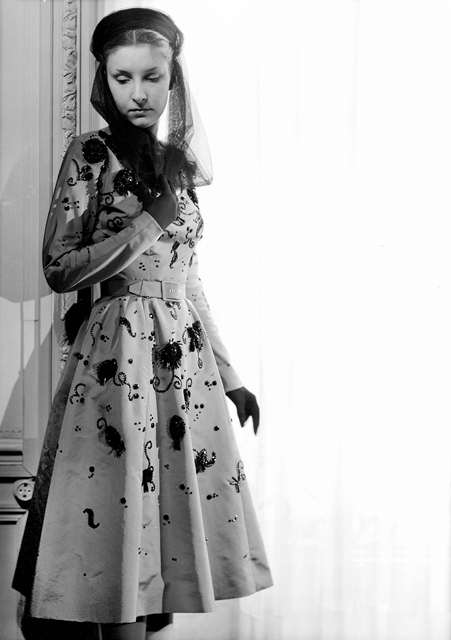 Close friends with Balenciaga, Hubert de Givenchy gave his philosophy in 1952 off; ‘All a woman needs to be chic are a raincoat, two suits, a pair of trousers and a cashmere sweater.’ Opening his own house in 1952 at only 25, his premiere was met with great applause. Responsible for making Audrey Hepburn an icon of elegance, he designed her the perfect little black dress worn in “Breakfast at Tiffany’s”

The Return of Chanel

Coco Chanel re-established herself during the Fifties. She was in opposition with the other designers, she didn’t agree with using excessive amounts of fabric as she felt it was wasteful. Chanel realised couture was on its way out and the way to survive was to deliver to the mass markets. Her style was simple and eloquent still and during the fifties she began the introduction of the Little Black Dress.

During the fifties a teenage market was introduced. For the first time teenagers were taking their own inspiration and not following their parents fashion. Film and music influenced the new generation and it was all about rebelling against the parents. Teenagers now had their own money to spend and subsequently they had their own places to socialise. Cafes and diners were filled with the younger generation wearing poodle skirts with cinched in waists. Boys were influenced by Elvis and James Dean’s style in “Rebel Without a Cause” Leather jackets, denim, white t-shirts and hair gelled back was the only way to look.

With the consumer boom from the post war, working class teenagers could afford their own clothes still wanting to shock and rebel against their parents generation the teddy boy look was often seen on the Fifties teenager.

The teenage group was also inspired by the Beat Generation which was a group of post war American writers that documented and inspired elements of ‘Beat’ culture including the subversion to materialism, an interest in eastern religion and the experimentation of drugs and sexuality. The term ‘beatnik’ was coined to describe the sub culture who were inspired by this. Beatniks had their own uniform, consisting of striped shirts and oversized dresses. Short sleeved sweatshirts and cowl necks were worn with pencil skirts or slim fitting trousers and the style often was seen worn in all black. 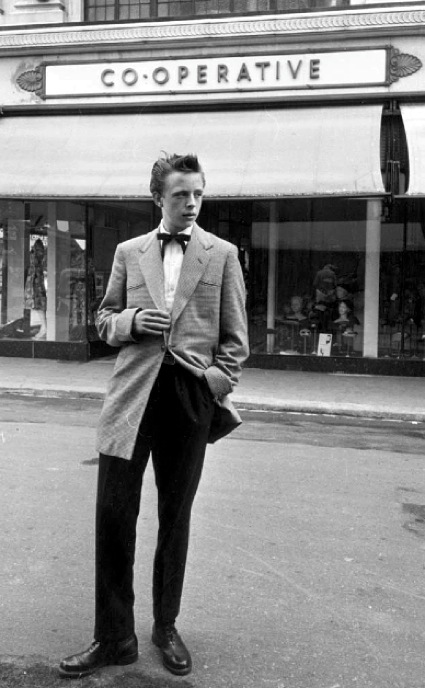