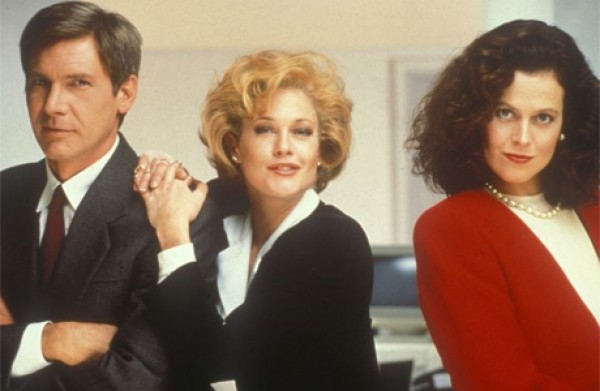 Making a role model of a character in a film is a sure fire way to get set trends. Melanie Griffith plays Tess McGill in working girl, a secretary whose idea gets stolen by her boss and she seizes an opportunity to get the credit for it by pretending to be her. Her strong fearless character shows courage in a world where women are struggling to get ahead in their careers.

Fashion plays a role of power and class with costume designs by Ann Roth. Tess initially wears light colour shapeless suits with large shoulder pads and her hair is a big mess of backcombed curls. Tess’ boss tells her “dress shabbily and they notice the dress; dress impeccably and they notice the woman” which prompts Tess to shed some of her garish jewellery that signals her Staten Island roots. When taking on the role of her boss, one snip of the scissors sees her unruly hair transform into a manageable and stylish bob. She helps herself to her boss’ vast wardrobe of designer clothes but does not lose her soft fashion style that expresses her character. She manifests empowerment and although the fashions were still copied from both perspectives (before and after) her character is what trended. Women were finally beginning to realise that they didn’t have to be ruthless and backstabbing to get ahead in the business world.