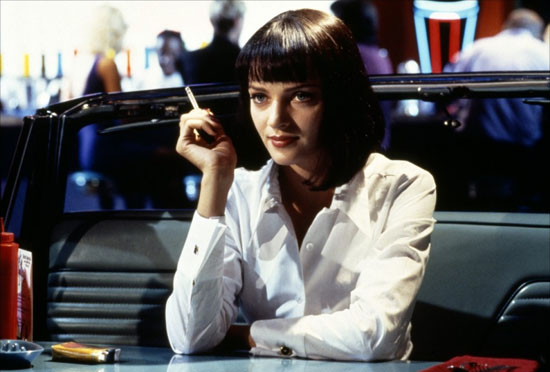 Mrs. Mia Wallace, the epitome of cool sexy, she sweeps us into her life with her gentle mysteriousness and we want to exude her kind of confidence. The scene in Jack Rabbit slims where she and Vincent Vega win the dance contest, her effortless style was copied the world over by women trying to replicate her nonchalance. The crisp white shirt became a must have wardrobe accessory and women started to wear ankle grazer trousers with a slight flare. Her dark bobbed wig looked so sharp that it almost softened the dark rouge noir colour on her lips and nails, a colour invented by Chanel that sold out everywhere following the film’s success and became the colour of the 90s. The image of her holding a cigarette, looking smokily into the camera became the antithesis to Audrey Hepburn’s innocent Breakfast at Tiffany’s image but almost as popular.