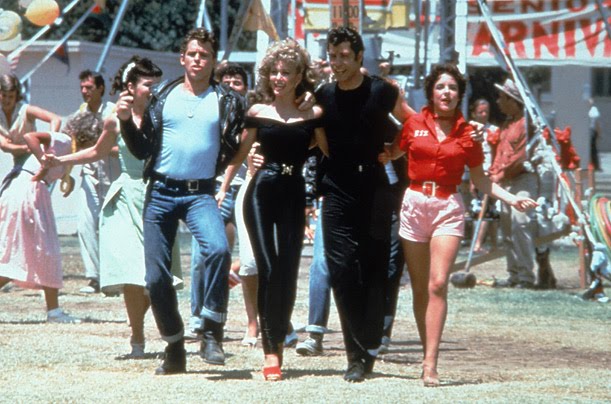 This film, made in 1978 but set in the 1950s was the highest grossing movie of 1978 and the highest grossing musical of all time. It is a musical centred around a group of high school students in their final year. Danny Zuko, played by John Travolta is a greaser (named so because of the grease they wear in their hair) who pretends to be a jock when he falls in love with goody two shoes Sandy (Olivia Newton John). It unfolds on them learning the truth about each other and the fashions that define young people of their time.

Being a light-hearted musical the film is very visually enjoyable, including the fashionable clothes of the 50’s, the poodle skirt, the sweater twinset, ponytails, headbands and neck scarves, pedal pushers and leggings. For the men: tight fitting high waisted trousers, t-shirts with the sleeves rolled up and leather jackets or letter jackets and cardigans for the jocks. It brought around a resurgence of 1950s fashion in the Seventies and was a cult classic from which the fashion is still copied.