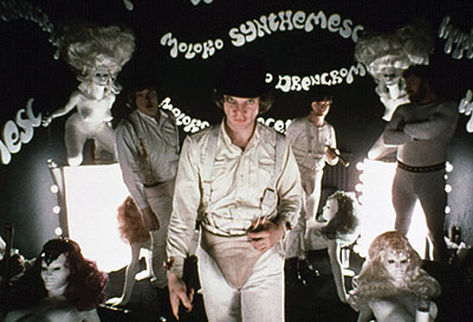 With the nature of this film being mainly centred around murder and violence, it was considered a landmark in the relaxation of violence in cinema. Based on a novel of the same name written in 1962, Stanley Kubrick stuck true to its roots and made sure it was a post mod masterpiece.

Milena Canonero was the costume designer in her first major film of her career, and excelled in teaming the strange pornographic, violent subject matter with a post modernism wardrobe.

The Droogs are a gang common of London in the Sixties and Seventies, who represented the decaying, complacent youths of society. They are dressed in what looks like underwear, long johns with suspenders and a sports cup over the top with a black bowler hat. The bizarreness of this outfit choice reinforces the nonchalance and disturbance of their minds.

The victims are always dressed in comfortable, homely clothes indicating their vulnerability. Milena Canonero sticks to a rather primary colour pallet, including pastels and brights but mainly block colours, mirroring the mod culture.

The film was influential in punk and skinhead fashions of the Seventies and also had an effect on home wares and interior design, bringing forward a more minimalist yet colour heavy influence.