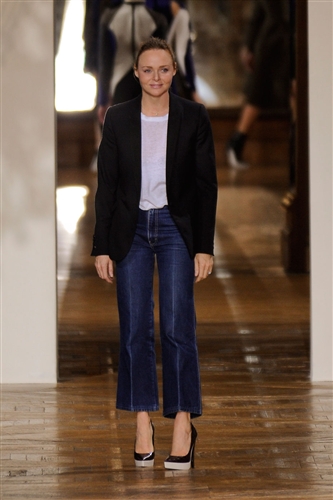 The second child of former Beatle Sir Paul McCartney and Linda Eastman, Stella McCartney’s interest in fashion started when she designed her first jacket at age 13. Three years later she began an internship for Christian Lacroix which followed with her working for Edward Sexton, her father’s Savile Row tailor.

With her talents growing, she attended Central Saint Martins College of Art and Design, enrolling on a fashion design course. Graduating in 1995, her graduation catwalk show was modelled by her personal friends, Naomi Campbell, Yasmin Le Bon and Kate Moss, all for free.

Her show was successful and the entire collection was bought by Tokio, a London boutique as well as her designs licensed to Browns, Joseph, Bergdorf Goodman and Neiman Marcus.

In 1997 McCartney was appointed as Creative Director of Chloé, succeeding Karl Lagerfeld. Her friend and assistant, Phoebe Philo accompanied McCartney to Chloe’.

In 2001, McCartney left Chloe to launch her own fashion house with the help form the Gucci Group. Her first collection showed in Paris the same year. Two years later she released her first perfume, ‘Stella’.

In 2004, McCartney launched a long running venture with Adidas, designing sportswear for women. In 2005, McCartney collaborated with H&M on a one off collection. The designs sold out worldwide immediately. In 2008 a lingerie line was added to the company with a portfolio already including, ready-to-wear, accessories, eyewear, fragrance and skincare. Two years later a children line was launched.n 2011, McCartney designed costumes for the New York City Ballet’s Ocean’s Kingdom. McCartney is currently designing the sportswear for the British Olympic and Paralympics teams for the London 2012 Olympic and Paralympics Games under the collaboration with Adidas.

With more than 15 freestanding stores worldwide, the Stella McCartney style sharply tailored with a sexy femininity. Her designs speak natural confidence and with McCartney being a lifelong vegetarian, never uses leather or fur in her designs.