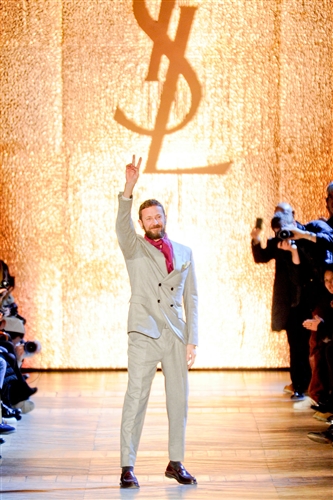 Stefano Pilati trained as a land surveyor and had early interests in architecture. While sketching, he realised his love for drawing which led him to investigate the fashion world.

Quitting his course, Pilati gained an internship with Nino Cerruti aged 17. With his skills growing, Pilati found a job at a velvet manufacturer. After only a few months of working for the company, he was designing the business’s entire collections and presenting them in Europe. This experience helped Pilati secure jobs as a fabric consultant for a number of major designers including Versace, Valentino, Jil Sander and Dries Van Noten.

In 1993 Pilati was hired as a menswear design assistant at Giorgio Armani. Two years later Pilati leftArmani and joined Prada as the head of research and development. In 1998 Pilati was promoted to assistant designer at Miu Miu, a brand of the Prada fashion house.

In 2000 Pilati joined Yves Saint Laurent as design director. After working under Tom Ford, Pilati was appointed creative director when Ford left the company in 2004

While at Yves Saint Laurent, Pilati designed some inaugural must have items for the brand including the tulip skirt in 2004 and the muse bag in 2005 and 2008.

After eight years as creative director at Yves Saint Laurent, Pilati left the label in March 2012 after presenting his final autumn/winter 12 collection. After heavy speculation over John Galliano’s replacement at Dior, in September 2012 Pilati was named Creative Director for  Ermenegildo Zegna, where he oversees menswear, as well as the brand’s secondary womenswear line, Agnona

Stefano Pilati has a feel for trends. His classic style of elegance combines with a modern edge that focuses on silhouettes. Influenced by Yves Saint Laurent’s backlog of designs, Pilati concentrates on the cut, fabric and pattern.