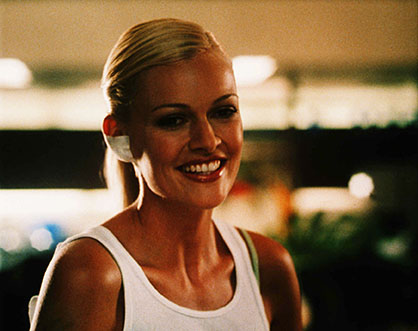 Shalom Harlow was born in 1973 in Ontario and is a well-know Canadian model and actress.

She was discovered, aged 17, while at a Cure concert and started her modelling career as soon as she finished high school. Shalom was hugely successful in the fashion industry and was popular both in commercial and high fashion campaigns leading her to work prolifically across the industry.

Shalom made her modelling debut on the runways in Paris and followed in the footsteps of modelling legends like Naomi Campbell and Linda Evangelista. Shalom was one of the models that helped usher in the new look for models, moving away from the athletic glamorous look of the original supermodels and popularising a waif-like look. Karl Lagerfeld was one of the first champions of this week and made Shalom the face of Chanel’s Coco perfume. Shalom also became an instant favourite of respected photographer Steven Meisel.

Shalom was famed for her elegance and natural grace on the runway. Tonne Goodman of Vogue said: “She is probable one of the most elegant creatures there is, and she’s got this incredibly sweet, generous and gracious personality that is coupled with it.” As well as seeming at home on the runway Shalom also had a natural talent for more commercial work, and her trademark smile became famous across the industry. Shalom has appeared in a long list of high end campaigns including Chanel, Joop, Tiffany, Jason Wu and H&M.

Shalom has done some acting work appearing in films ‘How to Loose a guy in 10 days’, ‘Vanilla Sky’ and ‘Head over heels’ amongst others. She also co-hosted MTV’s ‘House of Style’ along with fellow supermodel and best friend Amber Valetta.

Shalom’s success in the industry is still evident, in 2008 she featured in the Spring/Summer campaign for Valentino and in 2009 she was the only model for a Viktor & Rolf digital catwalk show.