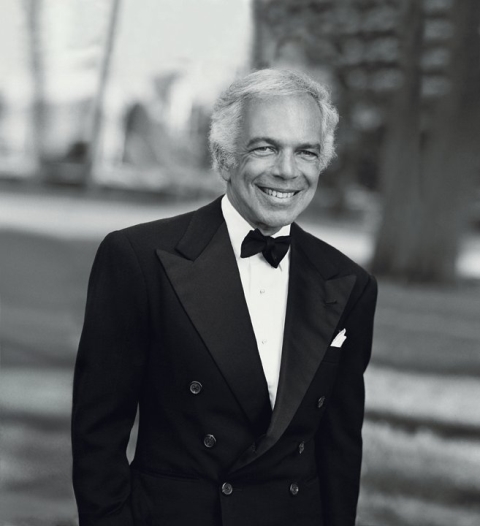 Born to Jewish immigrants, Ralph Lauren grew up in the Bronx, New York. Raised with his three older brothers, Lauren’s fashion sense started at an early age. Buying expensive suits, with money he earned from his after school job, he wanted to look stylish from the age of 12.
During school, Lauren sold ties he had made for other students. Years later, at the age of 16, Ralph Laurens elder brother changed the last name from Lifshitz to Lauren due to bullying. After school he attended Bauruch College where he studied business but dropped out after only two years.

Following this he served two years in the U.S army between 1962 to 1964. The same year he married Ricky Anne Low-Beer. For the next few years Lauren worked as a sales assistant at Brooks Brothers and then for A Rivetz & Co., a tie manufacturer. It 1967 Lauren achieved financial backing from Norman Hilton to open a necktie store in New York, where he sold his own designs.

While developing his collection of tie designs, the department store Bloomingdale’s took interest, but insisted Lauren remove his name from the ties’ label and make them narrower but Lauren refused to sell to Bloomingdales under the conditions.

With the Polo label ties the direct opposite of the convention styles of the time, his wider, flamboyant ties, made out of opulent materials quickly became a menswear status item. The follow year he designed a menswear line and in 1969, Polo by Ralph Lauren established the first shop with in a shop, in the department store Bloomingdales.

In 1970 Lauren received his first Coty Award for Menswear and the following year a womenswear collection was introduced. The women’s line also started the polo player emblem which was originally on the cuff of women’s tailored shirts. In 1974, Ralph Lauren designed the costumes for the film ‘The Great Gatsby’. Lauren dressed the entire male cast in 1920’s styled suits and sweaters. The following year Lauren won the American Fashion Award and in 1976, Lauren won the Coty Award for womenswear as well as entering the Coty Hall of Fame for Menswear. The following year he did the same for womenswear.

In 1983 Lauren released a home collection and in 1986, Polo Ralph Lauren opened a flagship store on Madison Avenue 72nd Street in Rhinelander mansion, raising the bar for the retail experience.

In 1992, Audrey Hepburn presented Lauren with the CFDA Lifetime Achievement Award and the following year, the Polo Sport line was introduced. In 1997 Ralph Lauren received CFDA’s 1996 Menswear Designer of the Year Award and with the millennium, Lauren founded Ralph Lauren Media. In 2004 a new line Rugby was introduced, a lifestyle collection aimed at ages 16 – 25. In 2007 the CFDA honoured Lauren with the first ever American Fashion Legend Award and in the same year a watch and jewellery line was added to Polo Ralph Lauren.

In 2009 the CFDA gave Lauren the fist ever Popular Vote Award, the Rugby line launched an iPhone App and also produced their first online fashion show. An incredibly famous fashion house, Ralph Lauren was the first designer to merge American style with sartorial refinement. His style is preppy romantic with a classic American heritage.