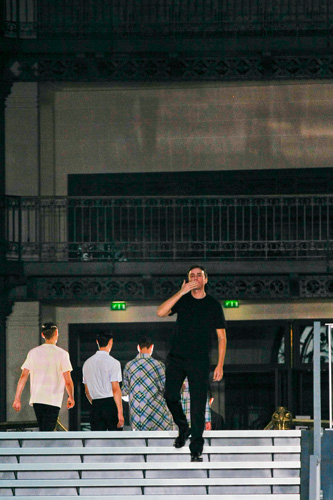 Raf Simons originally trained in Industrial and Furniture Design. While still studying, Simons interned at the design studio of Walter Van Beirendonck, working on the decoration and presentation of his showrooms and collections. After graduating in 1991, Simons worked as a furniture designer.

Encouraged by Linda Loppa, head of fashion at the Antwerp Royal Academy, Simons decided to change his profession and became a self-trained menswear designer. In 1995 he launched his own label, Raf Simons.

With the success of his business growing, in March 2000, Simons decided to take a break due to the restrictions he felt from the business side of fashion. After announcing he would quit, the following year after an offer from Belgian manufacturer, Gysemans Clothing Industry, he decided to restart the company, but with a smaller group of collaborators.

In 2008, Simons opened two flagship stores in Japan for his own label. The same year he expanded his label by adding bags, leather goods, footwear and eyewear. He also began an ongoing collaboration with Fred Perry, as well as collaborating with Eastpak on a range of bags.

With his style being described as influential, Raf Simons is seen as an innovator in contemporary menswear. His style is known for its modern proportions, classic sartorial cuts inspired by both rebellious youth cultures and traditional menswear.

In 2012, after many especulations, he was name Creative Director for Dior.