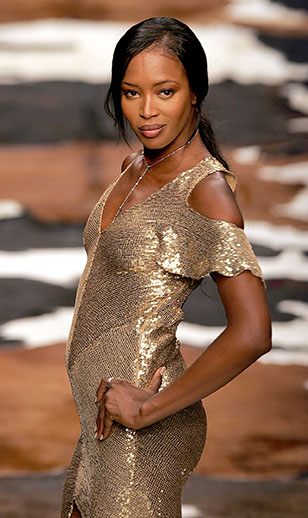 Naomi Campbell was born in London in 1970 and her work as a model has made her a household name across the world.

She sits alongside other great models such as Linda Evangelista and Christy Turlington as one of the most iconic supermodels of  all time and is grouped into that infamous group of ‘Supers’.

Naomi’s career began at a very young age, she appeared in a music video for Bob Marley for the song ‘Is This Love’ at the tender age of seven, and her success continued from there as she appeared in a children’s television series later that year.

When she was 15 Naomi was scouted by Beth Boldt, head of Synchro model agency while she was shopping in Covent Garden. From this moment Naomi’s career took off and didn’t stop, before she was 16 she had already appeared on the cover of Elle and she was a frequent face on high end magazine covers and of course on the catwalk from then onwards.

Naomi was a stand out face in the fashion industry and soon appeared walking for prestigious designers such as Versace, Azzedine Alaia, Isaac Mizrahi and many more.

Naomi has appeared on more than 500 magazine covers and been shot by some of the most respected photographers in the industry including Steven Meisel, Peter Lindbergh, Herb Ritts and Bruce Weber. Naomi has also featured in countless campaigns for designers including Burberry, Yves Saint Laurent, Valentino, Louis Vuitton, Fendi, Chloé and Dolce & Gabbana.

Following an appearance on the cover of Vogue alongside Christy Turlington, Linda Evangelista, Cindy Crawford and Tatjana Patiz, Naomi appeared with the same group in a music video for George Michael. The video for the song ‘Freedom’ has become symbolic of its time and it still one of the most famous music videos of all time. By the early 90s this group of models, with the later addition of Kate Moss, had formed a prestigious and in demand group of supermodels dubbed ‘Big Six’.

Naomi’s career is littered with iconic moments, from walking the runway for Versace alongside other supers singing ‘Freedom’, appearing in a music video for Michael Jackson or featuring in Madonna’s highly controversial book ‘Sex’. Naomi is one of the most memorable faces of the fashion industries and has been included in some of the greatest magazine covers, runway shows and fashion collaborations of all time.

Naomi was also honoured, alongside other top models to be shot by Patrick Demarchelier for the 100th anniversary cover of US Vogue.

While maintaining her supermodel status Naomi also tried her hand at acting, writing and singing. She released an album titled ‘Babywoman’ and a novel called Swan. Neither of these were met with any success comparable to her work in the fashion industry.

Throughout her career Naomi has attracted a certain amount of scandal and some negative media attention. In 2002 she was involved in a lawsuit with the daily Mirror over photos of her leaving a Narcotics Anonymous meeting. Naomi is rumoured to have a quick temper and has on occasion been arrested and sued for acts of physical violence and verbal abuse and in 2008 she pleaded guilty to assaulting two police officers.

As is typical of a supermodel Naomi has been romantically linked with several high profile mean including Mike Tyon, Robert De Niro, Usher, Adam Clayton and Flavio Briatore. She has been dating business man Vladislav Doronin since 2008 and they live together in Moscow.

Naomi is still a current face in the fashion industry, in 2010 she appeared on the cover of Essence and V magazine and she also appeared with other supermodels and musicians Duran Duran on the cover of Harpers Bazaar. One year latter, Naome starred in the Duran Duran’s much-anticipated music video ‘Girl Panic!’ with the same supermodels Hellena Christensen, Cindy Crawford, Yasmine Le Bon and Eva Herzigova.