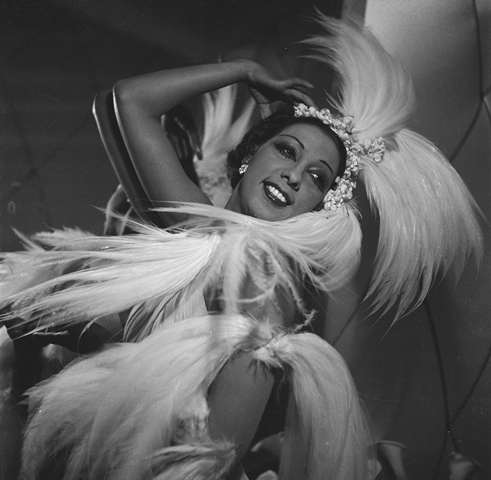 When considering Josephine Baker, images of finger waves, sashaying hips and her famous banana skirt immediately come to mind. The dancer came from humble beginnings and used her talents to cultivate a life of glamour. Baker was born June 23rd 1906, under the name Freda Josephine McDonald.

Though American-born in St. Louis Missouri, Baker found her fame in Paris after a stint in New York City during the Harlem Renaissance. In 1925, the dancer opened at the Theatre des Champs-Elysees, where she danced barely clothed and became an almost instant success. She then starred at the Folies Bergere where she performed her famous “Danse Sauvage” in nothing but a skirt fashioned out of bananas, creating her most iconic image.

Miuccia Prada used Josephine Baker as her main inspiration for Prada Spring/Summer 2011 where models were styled with finger waves and wore dresses covered in lively stripes and banana prints.

Baker’s flair for drama and excitement continued through her later shows, where she would often be accompanied by her pet Cheetah, Chiquita, who would terrorize the orchestra. Baker also starred in films such as Siren of the Tropics (1927), Zouzou (1934) and Princesse Tam Tam (1935) making the entertainer the first African American woman to star in a major motion picture.

In 1937 she officially became a French citizen, and was christened “Le Baker” by her French fans. The icon later received other notable monikers, such as the “Bronze Venus”, the “Black Pearl” and the “Creole Goddess”. Baker was adored by the French café society, and became a muse for Ernest Hemingway, Christian Dior and F. Scott Fitzgerald.  Hemingway called her, “the most sensational women anyone ever saw…” and one can only imagine how Baker’s glamour, exotic looks and extravagance may have inspired F. Scott Fitzgerald. Shirley Bassey also cited Baker as a major influence; “she went from a ‘petite danseuse sauvage’ with a decent voice to “la grande diva magnifique.”

The icon not only achieved recognition as a world class entertainer, but devoted her time during the war to the French Resistance and was later a great supporter of the American Civil Rights Movement in the1950s. She also adopted 12 orphans from different cultures, who she referred to as the “Rainbow Tribe”. The dancer also refused to perform for segregated audiences.