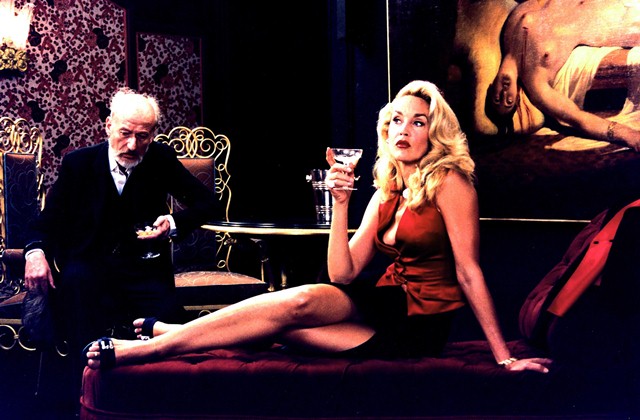 Jerry was staying at a hostel on the French Rivera when she was discovered sunbathing on a Saint Tropez beach, this moment was to lead to a long and successful career in the fashion industry. She went on to live in Paris and moved in with singer Grace Jones and they worked as models together. Jerry and Grace also had an infamous social life amongst the Parisian nightlife; often performing cabaret acts in clubs and parties.

1975 was when Jerry’s modeling career really began to take off, she appeared dressed as a mermaid on the cover of Roxy Music’s album Siren. This appearance led to her engagement to Roxy Music’s lead singer, Brian Ferry. Jerry went on to feature in a music video for Ferry for the hit song “Let’s Stick Together”. Over the next two years Jerry was also seen on countless magazine covers including Vogue and Cosmopolitan.

Jerry’s distinctive long blonde hair made her one of the most photographed models of her time. Later in the 70s Jerry met Rolling Stones front man Mick Jagger at a dinner party in Manhattan, for whom she would eventually leave Brian Ferry. They married in an unofficial Balinese ceremony consisting largely of Hindu ritual. They later got divorced in 1999 and Jagger argued that the marriage had never been legally binding.

Hall and Jagger’s relationship was very much in the public eye as they were seen together constantly, hanging out in fashionable bars such as Studio 54 and 21 Club. Hall is one of the most reliable sources of what is was really like to party with the stars of her time as she, unusually, enjoyed the nights soberly. Jagger wrote The Rolling Stones song “Miss You” for Hall. Jerry and Jagger went on to have four children together, two of them Elizabeth and Georgia May now follow in their mothers beautiful footsteps and work as models. In 2011 Hall appeared in a holiday campaign for H&M with daughter Georgia May.

Jerry has continued to model, she was shot by Karl Lagerfeld for a Chanel spring accessories catalogue in 2009 but she has increasingly focused her career on television and acting, she has also brought out a book – ‘Jerry Hall, My Life in Pictures’