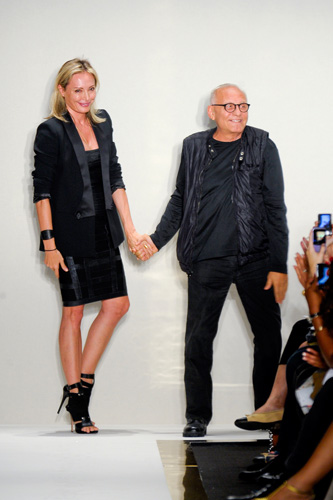 Hervé Léger learnt the values of shape and form through working for esteemed fashion houses including Chanel, Fendi, Lanvin and Chloé. Having honed his skills, Léger founded his own label in 1985, infusing his clothing with his expertise knowledge of body and form.

Taking inspiration from Azzedine Alaïa’s body hugging clothes, Léger established a body conscious style of dressing. He took materials that were traditionally used for underwear which helped him to create a bandage style mould. Through this technique his clothes shaped the figure resulting in curvaceous, clinging outfits.

In 1998 the label was bought by Max Azria, the owner of the BCBGMAXAZRIAGROUP. The acquisition marked the first American designer acquiring a French couturier.

In 2007 Max Azria re-launched the brand under his own creative direction and with the new name of Hervé Léger by Max Azria. Initially the label launched a capsule summer collection only available at prestigious department stores, however due to early success; the company reopened the Hervé Léger boutique at Rodeo Drive on Beverly Hills later that year.

In 2008 Max Azria presented the collection during New York Fashion Week. The debut saw critical praise and due to the on growing popularity of the brands re-launch, Azria was recognised with the 2008 Fashion Excellence Award at the 33rd Annual Dallas Fashion Awards.

Known for creating elasticated couture, Hervé Léger pioneered the bodycon dress during the eighties. Under the direction of Max Azria, Hervé Léger has been remoulded into a brand that captures the allure of powerful women. Hervé Léger by Max Azria draws on the labels history and bases its designs around the iconic bandage dress. Seamless sculpting, the designs show the allure of women, mixing modern femininity with the heritage of the house.