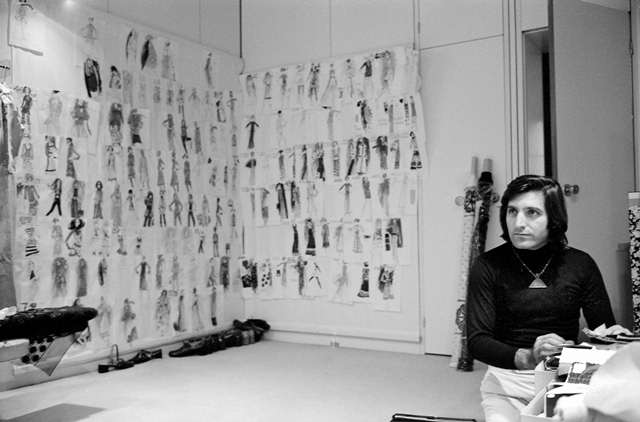 Emanuel Ungaro originally trained at his father’s tailoring business in Aix-en-Provence. Moving to Paris in 1955, Ungaro was hired by a well-known men’s tailor, Christiani. Three years later Balenciaga hired Ungaro as an assistant designer.  Following this, Ungaro was hired by a Spanish fashion house as head designer. Ungaro then left the company and went to work for Andrè Courrèges.

After gaining experience and developing a strict discipline and technique, Emanuel Ungaro decided to open his own fashion house in 1965. Located in Avenue Montaigne since 1967, here he applied his technical skills to geometric formed garments. Ungaro also worked with Sonia Knapp, a textile designer, to expand and create new colours for his designs.

In 2005, Emanuel Ungaro retired, selling his label to entrepreneur Asim Absullah. Following his retirement a number of designers have unsuccessfully worked for the label. However, in 2010 Giles Deacon was appointed as Creative Director of the brand aiming to return and re-interpret the rich heritage of Ungaro.

The house now has an international presence across Europe, the United States, the Far East and Middle East, as well as diffusion collections. Known for his unquestionable sophistication, Emanuel Ungaro’s designs reflect his sartorial skills.  Details combining colour, layering and different fabrics all combine to set off a harmonious style.