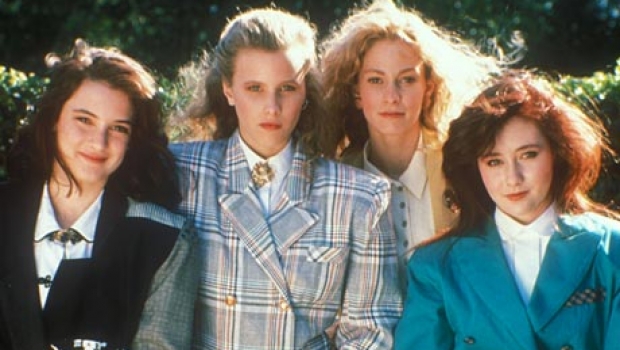 The 1980s was a decade mainly about cliques and social class divides. The reflection of this in fashion and film was not subtle and Heathers was no different.

A black comedy centred around three girls called Heather who rule the school and Veronica (Wynona rider) who is tired of their shallow acceptance and longs to be friends with her old clique, the geeks and awkwards. The popular girls waste no time in portraying themselves in the most fashionable clothes of the Eighties with tartan suit jackets and high shoulder pads, patchwork details and lace socks. When new boy Christian Slater arrives, Veronica expresses a will for rebellion and to break away from the clique by dressing quite differently, with black lace and dark tiered skirts with leggings, a more grungy, darker style. This is a reflection that she has changed social classes.

This film paved the way for the rise in popularity of grunge into the 1990‘s, a style adopted wholeheartedly by Winona Ryder herself.