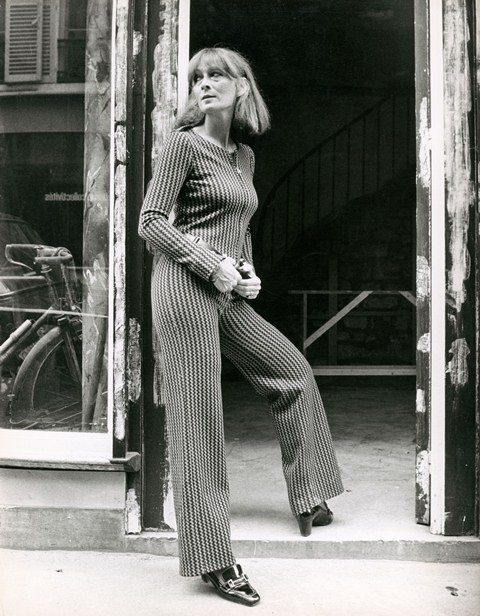 At the age of seventeen Sonia Rykiel’s fashion interest began when she was hired to dress window displays in a Parisian textile store. After meeting her husband Sam Rykiel, the owner of boutique specialising in elegant clothing, she married him in 1953.

While pregnant in 1962, Rykiel had problems finding soft sweaters to wear. With no formal training and via a Venice supplier used by her husband she began to design her own sweaters. With her sweater returning seven times for alterations she started to experiment with seams, hems and linings.

Her first sweater, called the Pooat thre boy Sweater, was sold in her husbands shop, it made the cover of Elle magazine and the Americans crowned her ‘Queen of the Knits’ in 1967. Opening her own boutique in 1968, by the seventies it was firmly established, specializing in knit wear. She later went on to add menswear, childrenswear, cosmetics and a household line.

In 1980 Rykiel was voted as one of the world’s ten most elegant women and in 1995 she collaborated with Malcolm McLaren on the song ‘Who the Hell is Sonia Rykiel?’ In 1998 she celebrated 30 years in fashion with a show encapsulating her successful style. At the same time she received a tribute in French Vogue. In February 2005 Rykiel launched an in-store shop for the Sonia Rykiel Woman line in New York along with the other three boutiques in the U.S.

Having been honoured by the French Ministry of Culture, Rykiel was the first designer to put seams on the outside of a garment and put print words on her sweaters.