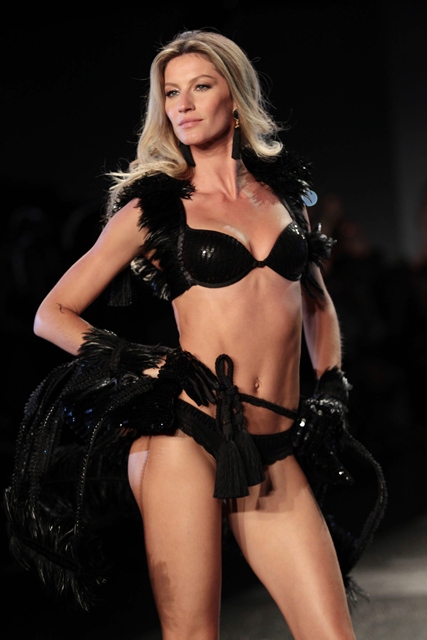 Gisele, born in 1980 is a Brazilian model and actress who has had a pivotal effect on the fashion industry and to this day retains international fame and success.

In 1993 Gisele’s mother encouraged her and two of her sisters to join a modelling course, this turned out to be the beginning of a momentous modelling career for Giselle as she competed in modelling competitions across Brazil before entering the Elite Model World contest held in Ibiza. She placed fourth in this and then went on to get her first international break through, appearing in NY Fashion Week in 1996.

In 1997 Gisele travelled to London and auditioned for 42 shows, she got her big break when she was chosen for her ability to walk in high heels on a slippery run way for Alexander McQueen’s April showers inspired Spring 1998 ready-to-wear show. McQueen also echoed accolades pronounced on Elle Macpherson a decade earlier, dubbing Gisele as ‘the Body’. This instantly increased her bookings.

Gisele has featured campaigns for many high end fashion houses, including Missoni, Chloé, Dolce & Gabbana,Valentino, Ralph Lauren and Versace. She has also been the cover girl for Vogue, i-D and many other prestigious fashion magazines.

She is the fourth model in history to be on the cover of Rolling Stone magazine where they titled her ‘the most beautiful girl in the world’ in 2000. In the same year Time magazine said she was ‘one of the few runway models whom straight men can name”.

Gisele is also famous for pioneering the “horse walk”, which is a form of walking on the catwalk where a model picks up her knees high and kicks her feet forwards, creating a stomping movement.

Gisele is also credited with ending the era of “Heroin Chic” in the modelling industry, as Vogue dubbed her she was “The Return of the Sexy Model”. Her success and immense sex appeal led her to being one of the Victoria’s Secret Angels from 2000 until 2006.

Since 2004 she has been the highest paid model in the world. According to Forbes, Gisele is on track to become the worlds first billionaire supermodel.

Gisele has also worked as an actress, appearing in films including ‘Taxi’ and ‘The Devil Wears Prada‘.

From 2000-2005 Giselle was in a high profile relationship with Leonardo DiCaprio. Se has been married to New England Patriots quarterback Tom Brady since 2009.