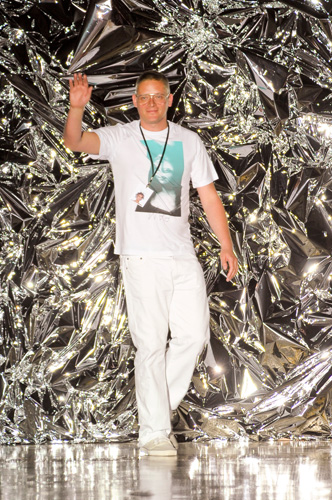 Giles Deacon spent his childhood in the country devoting most of his time outside. He originally planned to become a marine biologist, however, Deacon instead moved to London in 1988 to study fashion at Central Saint Martins College of Art and Design.

That same year Deacon established Doran Deacon with friend Fi Doran. Towards the end of the year Deacon moved to Paris, where he began a two year job at Jean-Charles de Castelbajac.

In 1998 Deacon was offered a job at Bottega Veneta. Hired based upon a comical sketch of a budgie driving a Rolls-Royce, Deacon was appointed chief designer. Adding edginess to the label, Deacon remained there for three years.

In 2001 Tom Ford approached Deacon and he began designing the womenswear line for Gucci. Here he helped Tom Ford inject the high glamour and sex appeal to Gucci and British fashion.

After only one year at Gucci, Deacon established the Giles label. In 2004 he debuted his collection at London Fashion Week. Modelled by Eva Herzigova, Nadja Auerman and Karen Elson, his first collection was a huge success. Sophisticated, feminine clothing saw a forties inspired style, featuring a playful vibe with a confident, glamorous edge. Featured in British, Italian, French, Japanese and American Vogue, his initial collection was bought by Harvey Nichols, Liberty and Selfridges.

Deacon collaborated with high street retailer New Look in 2007 creating a capsule collection for women, followed by a men’s collection the next year. In 2009 he made his Paris debut, showing at the Palais de Tokyo. That same year GQ named him Designer of the Year.

In 2010 Deacon was appointed creative director at French fashion house Emanuel Ungaro. Here Deacon added his playful twist to a sophisticated Parisian style, assimilating some of Ungaro’s classic looks. The following year Deacon left the fashion house choosing to focus instead on the expansion of his own label.

Known for his pop culture references and use of playful prints, Giles Deacon creates individual yet wearable clothes. Expertly cut, Deacon’s slightly subversive aesthetic is still obtainable in his irreverent approach to fashion.