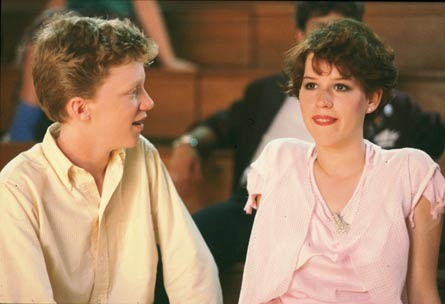 Molly Ringwald, a rising star of the 1980s is the leading actress in this teen romantic comedy and was one of the original Brat pack, a group of teenagers who appeared together in various films throughout the Eighties. As John Hughes directorial debut in 1984 it became the first in a series of films based on the musings of middle class high school students in the 1980s.

The fashion was rife, showing clothes typical of the eighties and although Sixteen Candles was tamer in style than a few of his other films, it still set a trend for kids of the eighties and one to be followed in many decades afterwards, including high waisted stone washed jeans and baggy off the shoulder t-shirts and jumpers.

The men wore chinos and letter jackets, lumberjack shirts and turned up jeans. It was a landmark in championing eighties fashion that we still return to today.