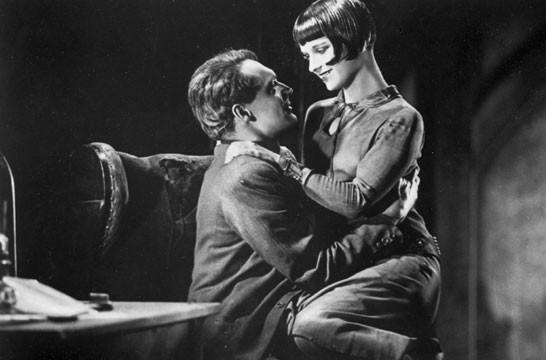 Louise Brooks once said, “A well dressed woman, even though her purse is painfully empty, can conquer the world”. That could have been the motto of Lulu, the role that made her a fashion icon for the ages.  She was said to be the ultimate flapper and her iconic blunt bangs in striking black gave conviction to the trend of the 1920s bob, so much so that in some parts the hairdo is still called “the Lulu” today.

Lulu’s beaded backless gowns in the film also created interest, portraying a sexual innocence that was true of the character but also an iconic beauty, made more striking by the depiction of these in black and white. These weren’t the only fashions of note in the film, its lesbian subplot in the attraction of Countess Augusta Geschwitz to Lulu, purportedly the first screen portrayal of lesbian attraction, showed the character of Geschwitz in a masculine style, wearing a tuxedo.

Also, for the scene in which Lulu picks up and seduces Jack, Georg Wilhelm Pabst selected one of Louise Brooks’s own suits for Lulu’s costume and defiled it, making it easier for Brooks to identify with the cheapened, sullied character she was portraying.