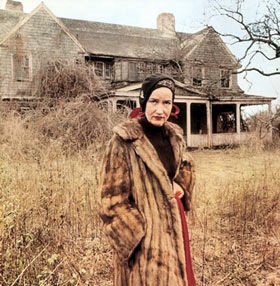 “Little Edie” Beale’s eccentricity and (more likely) lack of funds made her an accidental style icon and gave a new idea to the fashion world: that specific items don’t have to be worn for what they were made. A film documenting the lives of a mother and daughter (both Edith Beale), two reclusive socialites living in squalor in a mansion inherited from an estranged husband, showed an innovation with clothes that was entirely due to necessity.

An amalgamation of well-tailored designer clothes from a previous lifestyle made to last the years meant Edie wore skirts upside down and tied the ends like a sarong and towels as dresses. She would swathe her bald head in cashmere jumpers and fasten it with a garish broach. They both wore elaborate fur coats with a pair of house slippers and she would tie scarves around her head that would drape down as a top. She gave rise to what we now call “trash can fashion”.

In the Seventies it meant layers, clashing colours and fabrics and putting together items that were never meant to share a closet, let alone a body. It was accidental fashion on purpose and we still see variations of it today, perhaps the most modern versions sported by the Olsen twins.