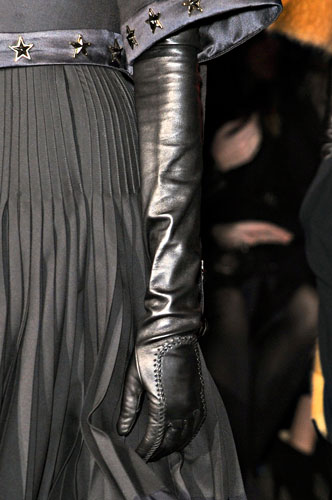 Gloves are an item of which are worn over the hands to protect them from harm, weather or as an accessory to an outfit. They can be seen in many different forms such as fingerless gloves (normally used in sport) that uses fabric to cover the hand, stopping at the bottom of the fingers sometimes with attached fabric available to cover them. Mittens, however, cover the whole hand without separate finger sections and are traditionally made of sheepskin.

Fabrics that may be used for gloves are normally leather, suede or wool appearing in a woven and knitted form. It is believed that gloves were even around in 400 BC. Originally gloves could be used as a uniform, part of religion or worn by royalty. They can be worn for many occasions, and were first seen to be fashionable in the 13th Century reaching up to the elbow, worn by women. Queen Elizabeth I continued this trend by adorning them in jewels much like royalties before her whereas the 17th Century required gloves to be made from chicken skin.

Gloves would be seen as a form of elegance amongst women in the late 19th Century and continued to be so into the 20th Century. Up until World War I, gloves were often elbow high but began to reduce in length from then on, seeming to stay solely at covering the hand in the 1960s.