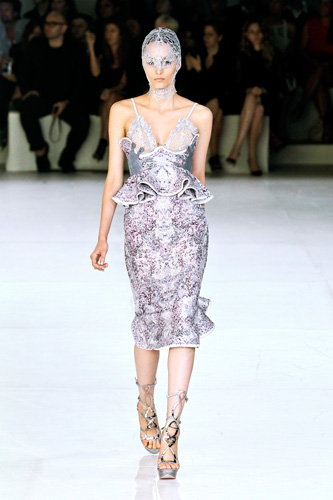 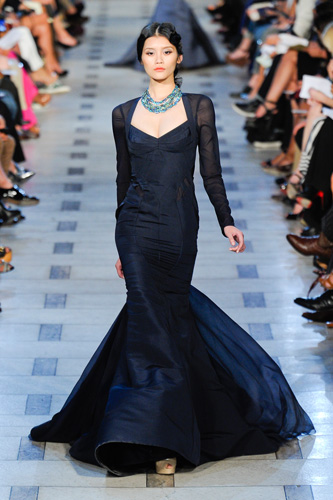 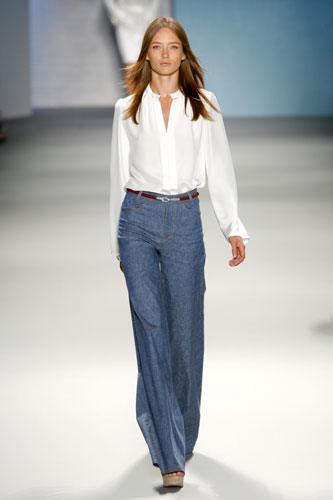 Flares refers to a projection of volume in a silhouette, flares are also referred to as a type of trouser style. A flare can feature on dresses or tops, particularly seeing reference in peplum tops and skirts. The Flares trouser curves out between the calf and the ankle creating a flare. This type of trouser is usually designed in the fabric denim. Flares were popular for men and women during the 1970s. Flares may also be referred to as bell bottoms and a boot leg cut and may also be to describe the amount of curve out of the trousers.

They are thought to have been created to accommodate a boot with the trouser and are normally worn with a Cuban heeled boot or Chelsea boots and with a t-shirt of which has graphic illustrations on. The bottom of the trouser may have a design feature of a turned up hem and a wider belt. For S/S 2011/12, flares are back on trend but taking on a new style in infatuating, flirtatious lace peplums which were shown to be heavily on trend with Alexander McQueen S/S 12 whilst Derek Lam S/S 11gave a smaller amount of flare than traditionally in denim trousers, flaring out more from the thigh than calf. Zac Posen S/S 12 used flaring in dresses to accentuate a curvaceous silhouette on the catwalk. This type of flare may be known as a “Fish Tail” too.