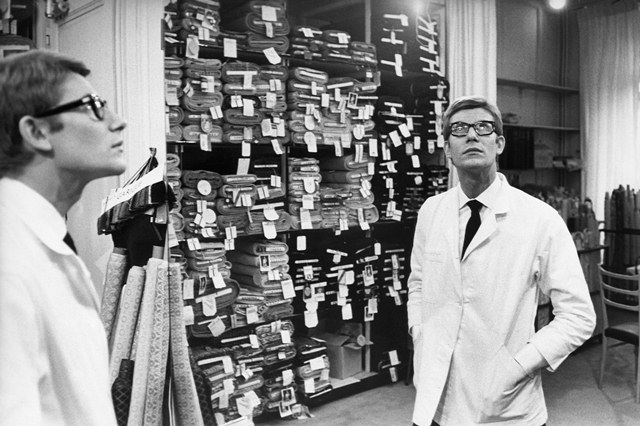 With an early interest in fashion, Yves Saint Laurent was inspired by Moliere’s Ecole des Femmes, impressed by the costumes and sets.

In 1953 Saint Laurent won first prize in a competition sponsored by the International Wool Secretariat for a black cocktail dress.

Encouraging his aspirations, Saint Laurent travelled to Paris in 1955, enrolling in a professional cutting school for three months.

In 1957 Christian Dior unexpectedly died of a stroke. His sudden death left Saint Laurent named as head designer of the house of Dior.

Saint Laurent presented his first collection in January 1958. At the time the house of Dior was responsible for nearly 50% of French fashion exports, making Saint Laurent’s success crucial for the French economy. The show featuring the “trapeze” look was deemed triumphant with the Parisians, proclaiming that Yves Saint Laurent had saved France.

Saint Laurent’s second collection for Dior saw drastically lowered hemlines and an emphasis on the décolletage. The following autumn/winter 59 collection saw skirts raised to the knees and belted waists.

In 1960 Saint Laurent was conscripted into the army. After only two months he was discharged due to ill health. Replacing Saint Laurent at Dior was Marc Bohan.

The following year the house of Dior refused to reinstate Saint Laurent as head designer. Saint Laurent sued the label, eventually winning a share of the profits for the period during which he designed.

Announcing plans to open his own couture house, Saint Laurent partnered with Pierre Berge and J Mack Robinson. Saint Laurent presented his first collection in 1962. The press were encouraging; with Life magazine calling his designs “the best suits since Chanel”. In 1963 Diana Vreeland of American Vogue praised his collections, hailing it beautiful and charming. This started Vreeland’s continuous extolment of Yves Saint Laurent.

Throughout the following years Saint Laurent created pivotal trends and styles including the Le Smoking jacket from 1966, which heralded the arrival of androgynous elegance and the safari look in 1968, featuring the shirt dress and safari jacket.

In 1982 Saint Laurent celebrated the 20th anniversary of the house of Saint Laurent. Diana Vreeland personally presented him with the International Fashion Award of the Council of Fashion Designers of America.

The following year the Metropolitan Museum of Art honoured Saint Laurent with a retrospective, “Yves Saint Laurent, Twenty-Five Years of Design”. The exhibition marked Saint Laurent as the first living designer to be honoured by the museum.

Saint Laurent sold his fashion house in 1993 to the pharmaceuticals company, Sanofi.

In 1998 the company held a 300-model fashion extravaganza at the final match of the football World Cup. The following year Saint Laurent’s timeless achievements were recognised by the Council of Fashion Designers of America, awarding him a Lifetime Achievement award.

That same year Gucci bought the YSL brand, appointing Tom Ford as designer of ready-to-wear, while keeping Saint Laurent as designer of the Haute Couture collections.

In 2002 Saint Laurent retired, choosing to spend most of his time in Marrakech, Morocco.

One thought on “Yves Saint Laurent”