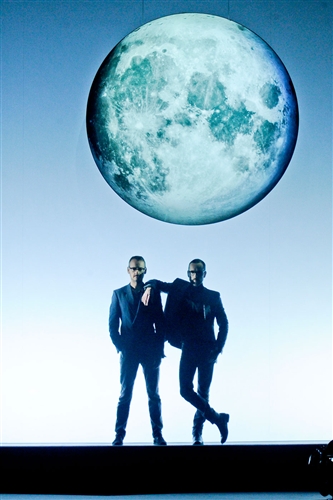 The pair met while studying fashion at the Arnhem Academy of Art and Design where they began working together upon graduation in 1992. In 1993 they relocated together to Paris where they started interning.

The same year, on their first collaboration, the Dutch design duo won three awards at the Hyeres fashion festival.

With an ever growing fan base, in 1998 the pair produced an unauthorized fashion show during Paris Fashion Week attracting media attention. Their first haute-couture collection ‘Atomic Bomb’ saw the tuxedo, little black dress and more stuffed and covered with multi coloured balloons and party accessories. Each outfit had to showings and of the second outing the stuffing was removed to reveal draped pieces. With the model’s heads resting on top of huge mushroom forms, the pair crossed fashion with fine art.

For their Babushka autumn/winter 1999 – 2000 collection, they dressed model Maggie Rizer in ten couture dresses one on top of each other. Viktor & Rolf added ready-to-wear and men’s lines to their business throughout the next few years and in 2003, a ten year retrospective of their work was put on in the Fashion Museum in Paris.

In 2005 Viktor & Rolf opened their first shop in Milan and collaborated with L’Oreal to create their first perfume ‘Flowerbomb’. In 2006 the pair saw commercial success, creating a capsule collection for H&M, which included a wedding dress.

In 2008 Renzo Rosso took over with a majority stake in the company. Viktor & Rolf stated it was to enable the company to grow with a wider range of products and stores. The same year an exhibition was presented celebrating their 15 year anniversary with key pieces from 1992 to 2008 made into miniatures on porcelain dolls, placed it a large doll house at the Barbican Art Gallery in London.

Blurring the lines between fashion and art, Viktor & Rolf are known for their slim silhouettes with added flamboyance, love of couture and elaborate draping.