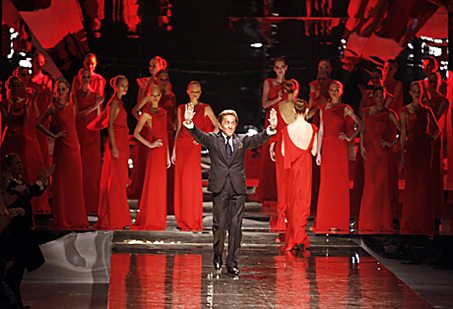 Valentino Garavani’s fashion interest began at an early age while he worked as an apprentice to his aunt Rosa and a local designer Ernetina Salvadeo, while still in primary school. Studying French and fashion design at Milan’s Accademia dell’Arte, from the help of his parents, he then moved to Paris to study at Ecole des Beaux-Arts and then at the Chambre Syndicale de la Couture Parisienne.

In 1950 Valentino assisted the Greek couturier Jean Desses, who specialised in draping. After five years with Desses, he moved to Guy Laroche and assisted Princess Irene Galitzine. In 1959, after discussion with his parents, Valentino returned to Italy and established his own business in 1960 on Rome’s Via Condotti. His premise was grand and resembled what Valentino had seen in Paris, he went as far to fly in Parisian models for his first show. During the same year Valentino met Giancarlo Giammetti, who was studying architecture while living in Northern Rome with his family. By coincidence the pair were both going to Capri on holiday at the same time, which created a long lasting friendship and partnership. Shortly after, Giammetti left university and became Valentino’s business partner.

In 1962, Valentino released his first collection at the Pitti Palace in Florence to great success. Seen as a true revelation, the young designer was deluged with orders and critical acclaim. In the sixties he also presented his no colour collection, consisting of models dressed in shades of white, cream, chalk, beige and sand. While the rest of the world was doing psychedelic colours, Valentino astounded everyone.

After his initial success, Valentino started to dress international stars and by the mid sixties Jacqueline Kennedy, Princess Margaret, Elizabeth Taylor, Audrey Hepburn, Begum Aga Khan, Veruschka and Gloria Guinness were all customers and personal friends. Jacqueline Kennedy’s love for Valentino designs was so great she wore six of his haute couture dresses in black and white during her year of mourning for John F. Kennedy’s. She then followed on to have him design her wedding dress to Aristotle Onassis. Thanks to his no colour collection, Valentino won the Neiman Marcus prize in 1967. The same year he premiered the Valentino White collection.

During the eighties Valentino brought out a children’s line and launched a line for a younger market called Oliver named after one of his dogs. In 1991, Valentino celebrated 30 years in couture with a three day celebration, encompassing 1,600 guests. The same year Elizabeth Taylor asked Valentino to design a dress for her eighth trip down the aisle.

In 1998 Valentino sold his company to Holding di Partecipaziono Industriali, but remained on as the designer. In 2002 HdP sold Valentino to Marzotto.

In 2006 Valentino featured in the movie ‘The Devil Wears Prada’ and in 2008 a feature length documentary was created on the designer called ‘Valentino: The Last Emperor’. Also in 2006 Valentino was honoured by France’s President Chirac with the Chevalier de la Legion d’honneur. In 2007 Valentino announced he would retire in January 2008 after his last haute couture show in Paris. Shown in Paris at the Musee Rodin, he received a standing ovation from the entire audience.

A talent of grand proportions, Valentino is an Italian icon known for glamour. His signature colour red has been trademarked as ‘Valentino red’, and his gorgeous dresses are romantic, dreamy, sexy and impeccably made.