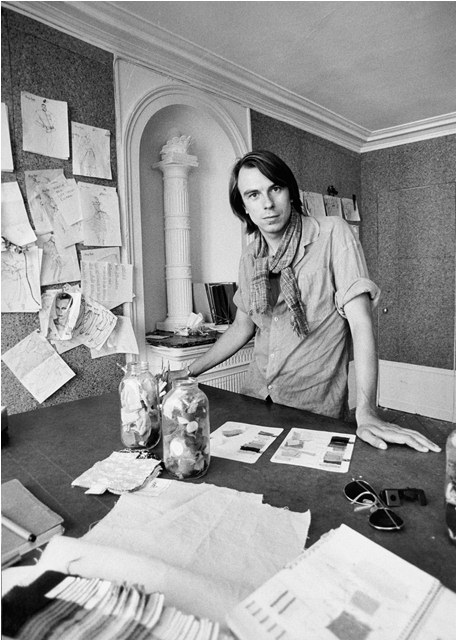 Studying dance from an early age, Thierry Mugler joined the Ballet of the National Rhine Opera aged 14. Dancing professionally for six years, Mugler developed an appreciation and understanding of performance. While dancing he also attended the Strasbourg School of Decorative Art, which led to him creating and designing his own clothes.

At 20, Mugler moved to Paris where he started designing for a boutique – Gudule. Two years later he started freelance designing in Paris, London, Milan and Barcelona for ready-to-wear fashion houses.

In 1973, Mugler launched his first clothing line ‘Café de Paris’. Azzedine Alaia joined Mugler and started to help design his creations, working for him up into the late seventies.

The following year, he created his own label. In 1976, fashion editor Melka Treanton asked him to show his collection in Tokyo and two years later Mugler opened his first boutique in Paris. At the same time Mugler launched a one off male collection.

In 1988 he produced his first book ‘Thierry Mugler, Photographer’.

With success growing, Mugler was building a name for his catwalk shows and by 1992; he had designed his first haute couture collection. The same year he released his first perfume ‘Angel’. In 1994, Mugler launched his ‘Scratched’ line which featured uneven hemlines and necklines.

Over the next two years, more boutiques opened and in 1997, Mugler released his first male fragrance, ‘A*MEN’.

In 1998, Mugler was the first designer to create a virtual fashion show on the computer and the following year, Mugler released his second book ‘Fashion Fetish Fantasy’.

Another fragrance was released in 2005 – ‘Alien’. The same year, Mugler opened the ‘Thierry Mugler Perfume Workshops’, with the aim to teach the craftsmanship and knowledge to make fragrances.

Mugler launched a collection of five more fragrances in 2007, with the idea of ‘perfume-trickery’ to ‘enhance one’s presence.’ The following year, a beauty line was launched. Two years later in 2010, Mugler launched a website womanity.com, a place for women to express their femininity and visions.

In 2009, Mugler was appointed Artistic Director for Beyonce’s ‘I Am? World Tour’ and designed all of the shows costumes.

Nicola Formichetti was announced as the new Creative Director in September 2010. Formichetti changed the brands named to Mugler. The following year, he launched the brands first menswear line.

Described as a ‘dynamic designer’, Thierry Mugler has worked with some of the worlds most famous figures. Beyonce, Lady Gaga and Mylene Farmer are all Mugler advocates. Known for his exceptional catwalk shows, Mugler always creates a performance. His style is ultimate femme fatale, structured elegance with a feminine silhouette that is accentuated by the sharp cuts.