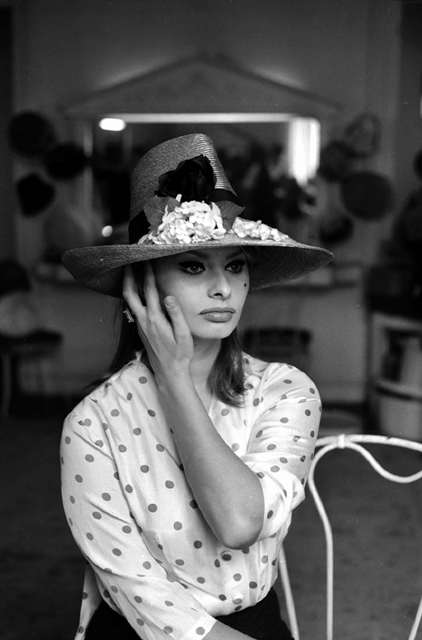 Sophia Loren represented the epitome of Italian beauty. Raven haired, curvaceous and with an unmistakeable alluring amount of sex appeal, she is viewed as the most successful and renowned Italian actress.  During her lifetime, Loren has so far stared in over 60 films and numerous TV series, for many of which she was nominated for (and won) prestigious acting awards.

Before showing an interest in acting, Loren entered a beauty contest in Naples at the age of fourteen, and made it into the final, although did not win. It was after this that she decided on having an acting career, and enrolled in acting classes before appearing in her first film “Quo Vadis”. Even though Loren was internationally acclaimed as a talented actress, it was not until she appeared in “Boy on a Dolphin” that she started to make an impact on Hollywood, leading to her working with the starts of the time, including Frank Sinatra and Cary Grant.

Loren’s sense of femininity is portrayed akin to that of Audrey Hepburn, and if anything is a bit more sensual. With a tall striking figure, Loren cuts a unique image whilst always retaining a sense of glamour and elegant sophistication. Whilst off duty from filming, Loren was often seen in casual – yet classically stylish – attire. Black midi length pencil skirts paired with a minimal pair of heels and a short sleeved Breton striped top, Loren’s personal sense of style was predictably European. However, Loren had an unmistakable air of glamour about her, which depicted the Golden Age of Hollywood very well. Dressed in lavish furs, and exquisitely adorned dresses, Loren always allowed the clothes to add to her feminine figure, and not the other way around. Oversized sunglasses and statement earrings were very popular with Loren, as well an array of hats.

Typical of many other actresses of the time, Loren created her own unique beauty signature and stuck to it. Her mane of dark brown – almost black – hair knew many different styles during her time filming, however one of her most memorable hairstyles is of it short and gently curled, just above her chin. Yet one of the more sexually alluring photos of her portrays her hair in a style similar to that of Brigitte Bardot; with her head cocked to one side and her hair seductively straight, flowing over one shoulder. Even though Sophia Loren was one of the most prominent pin up girls of the 1950’s, she held a voluptuousness that was not overtly sexual. It was not an obvious as Monroe’s was, but instead an acute reminder of her feminine appeal. However Loren is famously remembered as quoting – when referring to her full figure – ‘Everything you see, I owe to spaghetti’.