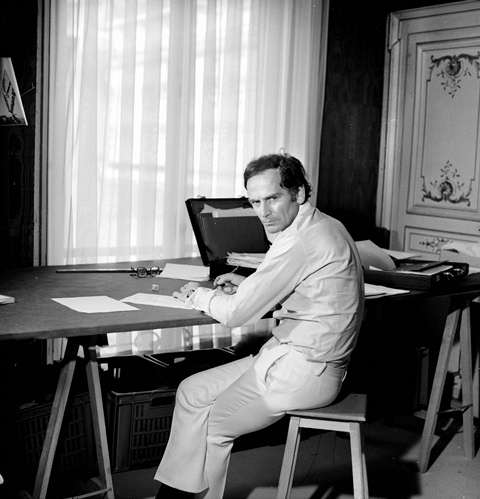 Cardin had an early interest in fashion deciding at eight that he wanted to be a couturier. Aged fourteen, Cardin was hired at the best tailor in Saint-Etienne, Chez Bompuis. There he began a tailor apprenticeship.

After several attempts to move to Paris, Cardin was introduced to Jeanne Paquin and secured a job at her Parisian house.

In 1945 Bebe Berad and Marcel Escoffier were designing costumes for the film “La Belle et La Bete” and decided to use the House of Paquin to help produce the garments. Attracted by Cardin’s enthusiasm, the pair asked him to work on the costumes. The film was a cult success and the costumes were widely praised.

Growing bored at Paquin, Cardin secured a job at Elsa Schiaparelli in 1946. Joining the label as a cutter, he only stayed for two months before leaving with the same anonymity.

During this small break in his career, Berard and Escoffier introduced Cardin to an assistant at Lucien Lelong, Christian Dior. The introduction was perfect timing as Dior was just about to open his own house and offered Cardin a job in 1946.

Having trained and worked for the best, Cardin left Christian Dior and opened his own company in 1950. Initially the business designed costumes for theatre but, in 1953, Cardin presented his first ladies collection. This was followed by the opening of his first boutique “Eve” in 1954. Three years later a second boutique “Adam” opened featuring men’s colourful ties and printed shirts.

In 1957 Cardin made his first visit to Japan.  Virtually unknown to the Japanese, his trip saw him present a fashion show at Tokyo’s fashion school “Bunka” and teach a course in making couture clothes. Cardin became the first French couturier to earn a following and awareness in the country.

Two years later Cardin added a women’s ready-to-wear line to his company. This was followed by the first children’s collection presented in Paris in 1966 and the opening of a children’s boutique two years later.

Cardin continued to expand his business over the following years and in 1977 was recognized with the Gold Thimble of French Haute-Couture. Two years later he received the same award again.

In 1991 Cardin held a fashion show in the Red Square, Moscow in front of 200,000 people. Two years later he added a cosmetics line to his ever growing business. In 1994 Cardin opened the Pierre Cardin Fashion and Design Centre.

Since then Cardin has received numerous awards, featured in retrospect’s and consistently expanded his business.  Seeing the demand from wealthy cliental wanting high fashion items, Cardin exploited the idea of the designer label. He moved into ready-to-wear, menswear, department stores, the licensing of his name and created a lifestyle business.

Excellently trained, Pierre Cardin’s skill is likened to that of Balenciaga and Schiaparelli with his success due to a marketing strategy years ahead of his time.