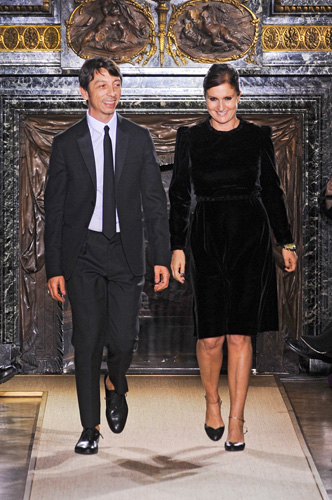 The duo opposed the minimalist trend of the 90s and focussed on sophistication and style. Together they played vital roles in creating some of Fendi’s most celebrated bags.

In 1999 Valentino Garavani personally approached the pair and asked them to create a collection of accessories that would embrace the style of the Valentino house. Together they designed accessories reflecting Valentino’s style and attention to exceptional couture detail. The exquisite accessories were full of Valentino glamour.

Since Valentino’s departure, he has given the duo his own seal of approval. Piccioli told Vogue in 2011 “He came to our last prêt-a-porter show and said, I’ll tell you what you have learned from me. You’ve learned to make women beautiful and modern”.

Together Maria Grazia Chiuri and Pier Paolo Piccioli have bought a younger feel to the brand. The style is still opulent, luxurious and innately feminine but the classic style has a contemporary allure. Their products have received unanimous approval from socialites, celebrities, critics and Valentino himself.