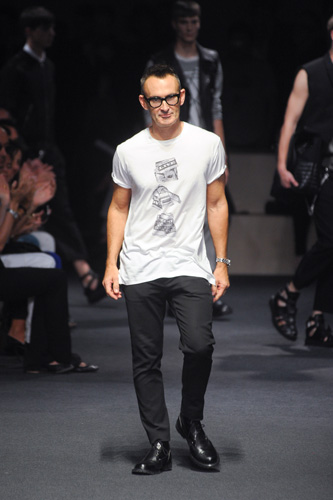 With a grandfather and great grandfather both being master tailors, an early interest in fashion and tailoring were instrumental in Neil Barrett’s interest in fashion. After graduating from Central Saint Martin’s School of Art and Design, Barrett moved onto the Royal College of Art to study for his Master’s.

Barrett’s designs caught the eye of fashion house Gucci, who hired him to design for their menswear line. With his designs bringing commercial success, Barrett was promoted to senior menswear designer.

After a successful period at Gucci, Barrett proposed the launch of Prada’s first designer menswear collection. Prada hired Barrett as creative director and, under his influence, Prada became renowned for minimalist menswear. During 1994 and 1995, the sales at Prada doubled.

In 1999, with the confidence and skills learnt from Prada and Gucci, Barrett launched his own name brand for men.  Two years later, the first flagship store was opened in Tokyo.

In 2002 Barrett starting showing his collections at Milan Fashion Week. The same year Barrett collaborated with Puma on a range of athletic shoes. The following year Puma named Barrett as creative director for some of the brand’s collections including Italy’s National Football Team. The football team not only wore Barrett’s sports kit designs, but also his formal wear making Barrett the first designer to exclusively dress a national football team.

In 2006, Barrett’s womenswear collection made its debut during New York Fashion Week. The following year, Barrett started designing a concept store with architect Zaha Hadid. The store revolved around a large sculpture and opened in 2008.

Neil Barrett’s designs offer an elegant rebelliousness. With refined, waisted suits that fit perfectly, Barrett tends not to follow trends but his own individual taste and instinct.