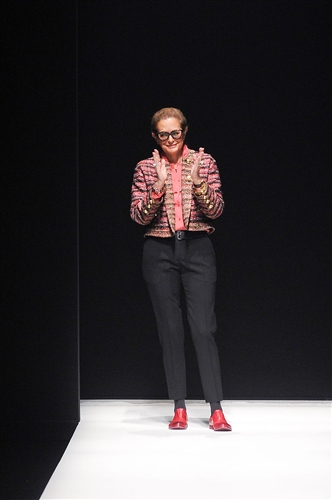 Franco Moschino studied fine arts attending the Accademia delle Belle Arti in Milan in 1967. With the hope of becoming a painter, Moschino worked as a freelance fashion illustrator to finance his studies. Falling in love with fashion, Moschino’s interests and plans shifted from paint to fabric.

Starting out his career, Moschino worked as an illustrator for Gianni Versace. In 1969 he began to design for Cadette, an Italian company. This followed with Moschino opening his own label in 1983 naming it Moonshadow. This quickly led to the launch of Moschino Couture! The first women’s fragrance was launched in 1987. In1988 Moschino launched a less expensive line, Cheap and Chic. Two years later the first male fragrance was launched.

Moschino started to make a name for himself as a ‘self styled court jester’. He began to send models down the runway with appliqué play on words on the clothing. ‘Fashion is Full of Chic’, ‘Ready to Where?’ and ‘Bull Chic’ were all featured on his clothing, mocking classic fashion.

Franco Moschino died on September 18th 1994 from a heart attack. His former assistant, Rossella Jardini, took over as creative director.

Moschino was known to create luxurious, wearable clothes that are covered with humour. His satirical style created fresh new designs that made fun out of his fellow designers.

Under Jardini’s direction, the company has moved away from its ironic attitude. The company was bought by the Aeffe fashion group in 1999. Since then the Moschino brand has designed outfits for Kylie Minogue’s 2005 Showgirl Tour, the 2006 Winter Olympics opening ceremony and Madonna’s 2008 Sticky & Sweet Tour.