Founded by Ottavio and Rosita Missoni in 1953 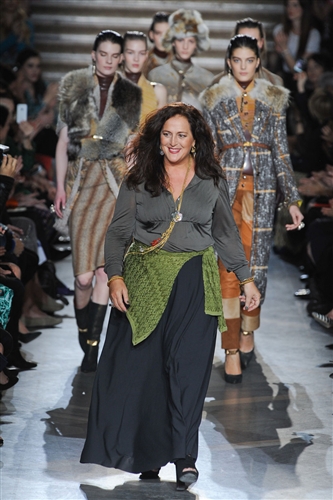 Ottavio Missoni was born in 1921, growing up his interest in sports led to him becoming an international athlete. After World War Two, Ottavio set up a business with a friend, Giorgio Oberweger, making wool track-suits. His track-suits were popular and chosen by the Italian team for the 1948 Olympics in London.

Ottavio later met Rosita, a daughter of shawl producer. The couple married in 1953 and set up a small knitwear shop in Gallarate in Northern Italy.

In 1958, the couple presented their first collection in Milan at La Rinascente. The collection named ‘Milano-Simpathy’ consisted of strong colours and stripes. The same year, their first child Angela was born.

At the beginning of the sixties, Missoni dresses started appearing in fashion magazines. In 1965, Anna Piaggi, an editor of Ariana magazine, started taking an interest in Missoni. With her backing of the brand, word of Missoni grew.

Rosita travelled to New York in the same year, where she met French stylist, Emmanuelle Kahn. Together they collaborated and designed a radical new collection for the next year breaking traditional uses of knit designs.

In 1967 Missoni were invited to show at the Pitti Palace in Florence. Styling the models, Rosita asked them to remove their bras. Under the catwalk lights, the clothes became transparent, causing a commotion. The same year, Missoni had their first cover: the front page of Arianna magazine. At the end of 1967, Missoni start selling in Paris.

In 1968, Missoni started to be recognized in the United States. The same year, French Elle put a Missoni design on the front page.

In 1969, Missoni were featured in Woman’s Wear Daily, who dedicated the opening page to the business. The same year the Missoni’s met Diana Vreeland in Rome. Impressed with their style, Vreeland arranged meetings in the USA with buyers. This led to their first boutique opening in Bloomingdales, New York in 1970.

In 1973, the Missoni’s received the ‘Neiman Marcus Fashion Award’. Three years later, Missoni opened a boutique in Milan. In 1979, the business presented its first menswear collection.

In 1980, the first fragrance was created as well as a new boutique opening in Paris and in 1984 another boutique was opened in New York. In 1986 the Missoni’s were awarded the ‘Premio Italia’ for printed fabric by the Como Silk Association.  Two years later, Ottavio was honoured with the ‘Commendatore al Meriot’ of the Italian Republic.

In 1998, Rosita handed over the running of the business to her daughter Angela. The same year a new line for men and women ‘M Missoni’ was created. At the end of the year, Missoni opened a flagship store in New York.

In 2000, an internet site was created and in 2003, Missoni celebrated 50 years in fashion. A retrospective show containing more than 100 archive pieces was shown. The show was brought to the Yoyogi Stadium in Tokyo and the Victoria and Albert Museum in London.

The business now has stores worldwide and has an exceptional reputation for knitwear. Known for their fine yarns, ripples of colour and multiple patterns, Missoni is an Italian icon for fashion and knitwear.